On the Occasion of Halloween, Some “Haunted” Glass

To celebrate Halloween we present some spooky-looking glass artifacts from the Wing collection. These images aren’t from a mad scientist’s laboratory…just a regular laboratory. The glass photographed below are all colorless, the result of chemical additives in the glass making process. Many of these compounds are reactive to ultraviolet light. We use a small UV light to identify some of these additives for cataloging and cross-mending purposes.

While glass seems perfectly solid and stable, chemically glass is a supercooled liquid that is in a “metastable” state. The main components of glass are the former (silica), a flux (an alkali), and a stabilizer. The most common forms of silica (silica dioxide) are sand and quartz, naturally occurring items that can be obtained rather easily. Glass can be produced from silica alone but the temperature required to melt it is quite high, over 2200 °F (1200 °C). In order to lower the transition point fluxes are added. Common fluxes included sodium carbonate (Na2CO3), or “soda,” and potassium oxide (K2O), or “potash.” Stabilizers are added to make the glass stronger and more resistant to water. In the 1700 and 1800s lead oxide (PbO) and calcium carbonate(CaCO3) from lime were often used as stabilizers (Goffer 2007:134; Jones et al. 1989 11-12; Price and Burton 2012:61). 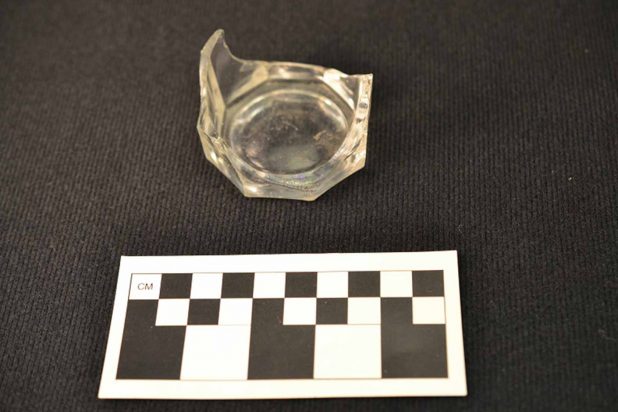 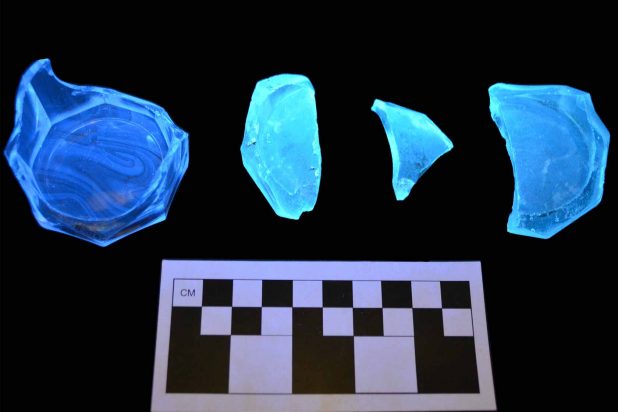 Please note: the use of UV lights should be done with caution. Ours is contained within a box that blocks the emission of the light from the surrounding area. UV light can be harmful to human eyes and skin, you should NEVER look into a UV light. Common products such as plexiglass and even many eyeglasses contain components that block UV rays. If you adopt UV light methods for archaeological or antiquing purposes please be as safe as possible.

These three components, the former, flux, and stabilizer, were combined in various ways to produce potash-lime glass, potash-lead glass and soda-lime glass. Potash-lead, or simply leaded, glass was developed in the late 17th century by Englishman George Ravenscroft. It is colorless, lustrous, and a little heavy. Its brilliant appearance and malleability (soft and easy to cut) made it a popular material for mouth-blown table glass, lamp chimneys, and medicinal vials. Early 19th century pressed glass was also made from leaded glass, although it was replaced with soda-lime glass in the 1860s. Soda-lime (also known as lime-flint) glass was also colorless and brilliant but much cheaper, easily pressed, and could be used in bottle producing machines (Jones et al. 1989:11-12; Price and Burton 2012:61).

When glass is exposed to humid conditions or particular pH levels (i.e. Virginia soils) the alkaline components begin to leach out of the glass. In addition to salts and mild acids, the activities of microogranisms and other little creatures in the soil can also negatively impact the surface of glass (Goffer 2007:135). Glass exposed to these conditions begins to devitrify, creating an iridescent surface with rainbow colors. If this continues, some glass will become a brown color and begin to flake, with only a fraction of the original glass left in the center. 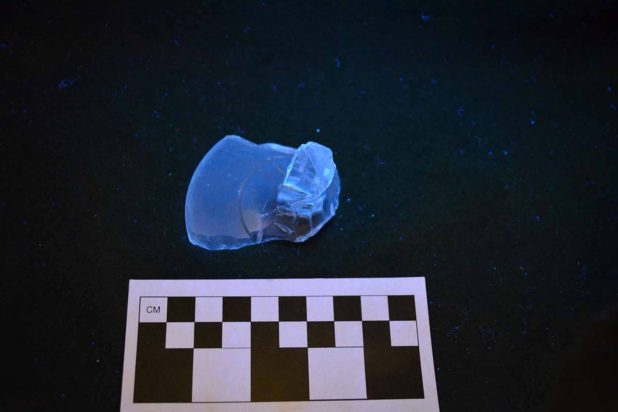 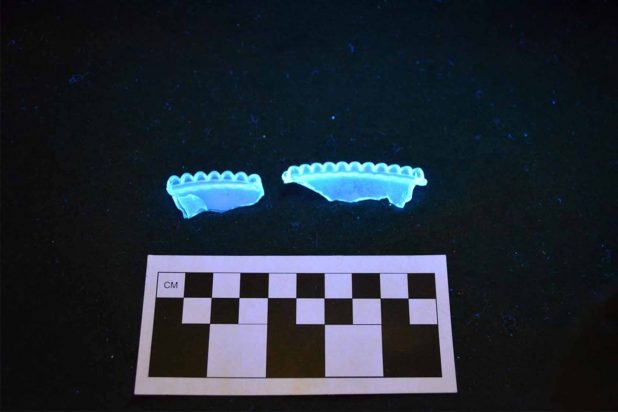 Chemical impurities also find their way into glass naturally or can be added by glass makers to manipulate the colors of the final products. A range of colors can be produced in all of the glass component combinations. Colors are produced by metallic oxides, the most common being iron, cobalt, tin, copper, uranium, and manganese. Iron is most common impurity that naturally occurs in sand was very difficult to remove. Smaller amounts of iron produced glass with yellow shades, whereas large amounts of iron coupled with magnesium creates the dark green color (or “black” glass) of wine bottles common on archaeological sites (Jones et al. 1989:13). Magnesium was used in the late 19th century to decolorize glass and create colorless vessels. When exposed to UV radiation (such as natural sun rays, rather than our UV light) these vessels took on a purple hue which archaeologists refer to as solarized amethyst. Uranium (yes, uranium) was added to glass in the late 19th and early part of the 20th century. This type of glass ranges in color from yellowish to greenish and fluoresces a very bright green under a UV light. 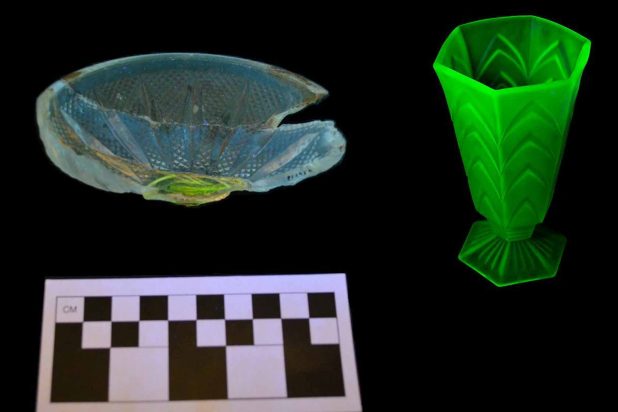 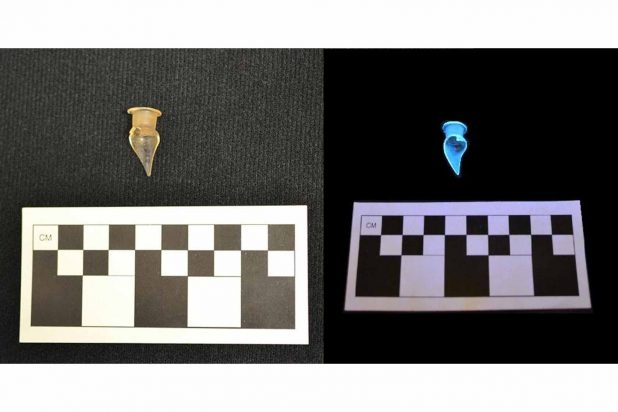 There are several good references for archaeologists on glass, most notably the Parks Canada Glass Glossary (available on the SHA website as a pdf here: http://www.sha.org/research/parks_canada_resources.cfm) and the Society for Historical Archaeology’s Historic Bottles site: http://www.sha.org/bottle/. If you are ever in western New York you should visit the Corning Museum of Glass which houses an amazing collection of ancient to modern glass, a teaching facility, and the Rakow Research Library (http://www.cmog.org/research/all-about-glass#.UI69rKOf6Uk)