Two of the major questions archaeologists attempt to answer when cataloguing artifacts is the identity of the manufacturer and when an object was made. This can be very difficult or impossible in many cases. However, particular types of artifacts were occasionally stamped or marked with artisan or factory insignia. One such type of artifact is ceramics.

A ceramic maker’s mark is a symbol, text, or combination thereof on the back or bottom of a vessel that refers to the factory or individual potter that made or decorated the item. They can be impressed, incised, painted, or printed onto the surface of pottery. These marks identify when the ceramics were produced and therefore help archaeologists determine the age of archaeological contexts. 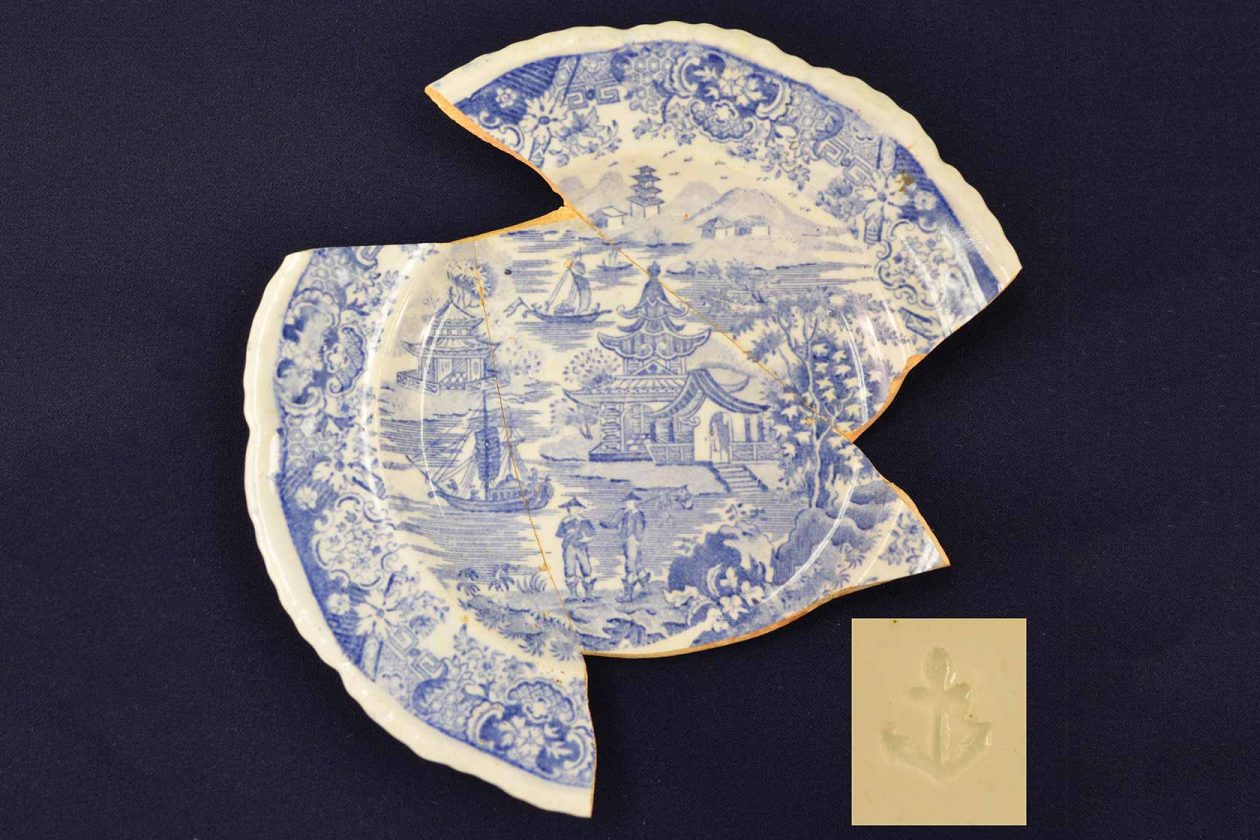 A mark can be an abstract shape, animal, plant, a whole range of identifiable objects, or just a set of initials. Many marks were composites of factory names, pattern names, and heraldic or patriotic imagery. In the nineteenth century there were several common British symbols such as the Staffordshire Knot, the Royal Arms, and the Garter , used by many English companies in numerous permutations. Some American pottery companies copied the Royal Arms mark for their own use, perhaps in an attempt to prove quality and entice buyers. You can see some examples here. The Homer Laughlin China Company (the producers of Fiesta Ware beginning in the 1930s) from Ohio took a completely opposite approach, depicting a triumphant eagle attacking a lion. 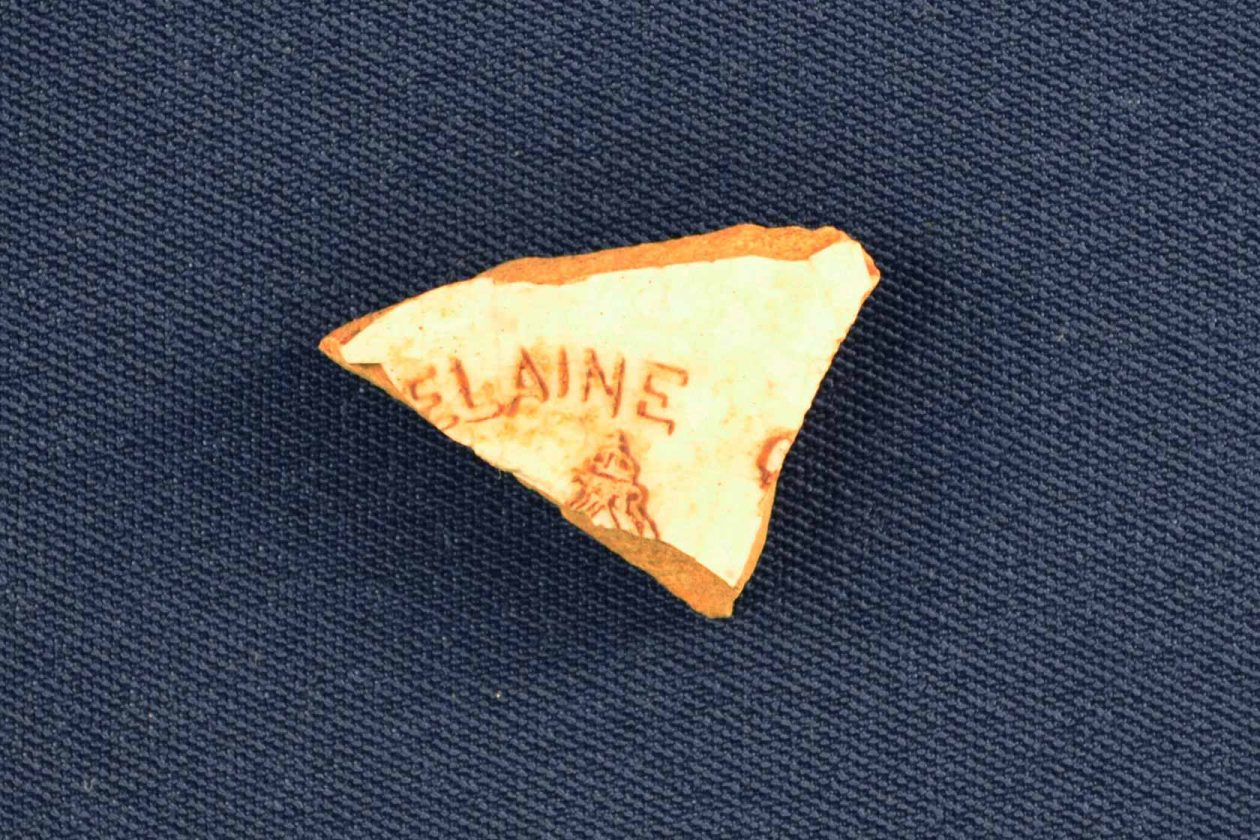 Particular words or shapes can be indicative of the year a piece was produced. For example, the appearance of the word “Royal” indicates a production date from the mid-19th century or later, the garter appeared after 1840 and the Staffordshire knot after about 1845 (Godden 1964:11). In the early 1840s the British government created a standardized patent mark, known as a registry mark, for pottery companies and was in use until the early 1880s. The various components of these marks identify the year, month, and day a vessel was produced, making them incredibly valuable to archaeologists and collectors alike. You can explore the components of registry marks here at the historic Staffordshire potteries website.

Thousands of marks have be extensively researched and indexed in published encyclopedias. These resources are invaluable to archaeologists when assigning production dates for the fragments we find in our excavations. Of the several types of encyclopedias available, we use:

Encyclopedia of British Pottery and Porcelain Marks by Geoffrey A. Godden (1964)

Encyclopedia of Marks on American, English, and European Earthenware, Ironstone, and Stoneware 1780-1980 by Arnold A. Kowalsky and Dorothy E. Kowalsky (1999)

Kovels’ New dictionary of Marks: Pottery and Porcelain 1850 to the Present by Ralph and Terry Kovel (1986)

These books are organized by manufacturer and show either a sample or full range of designs and text marks. Kovels’ book and Godden’s index of symbols and images allows archaeologists to search by image rather than by company name. The Society for Historical Archaeology published an extensive list of marks from American factories in East Liverpool, Ohio and is particularly good for companies manufacturing from the mid-nineteenth to early twentieth centuries. You can download pdfs of William Gates and Dana Ormerod’s articles on these companies here (volume 16 ). 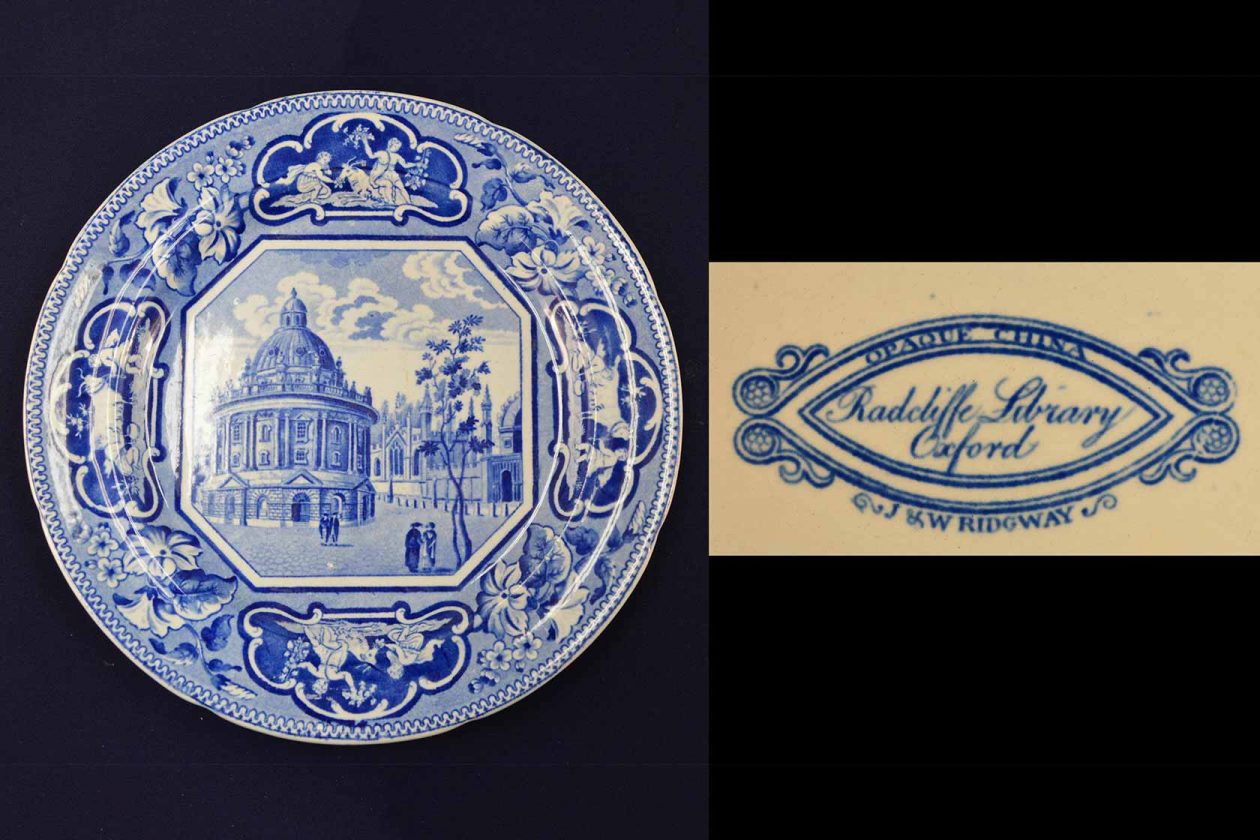 Depending upon how much of the mark has survived it can be very easy or next to impossible to identify. We recently came across a mark that was unfamiliar and set out to identify it. Without any text on the sherds we had to come up with descriptive terms to search for it in the mark encyclopedias. 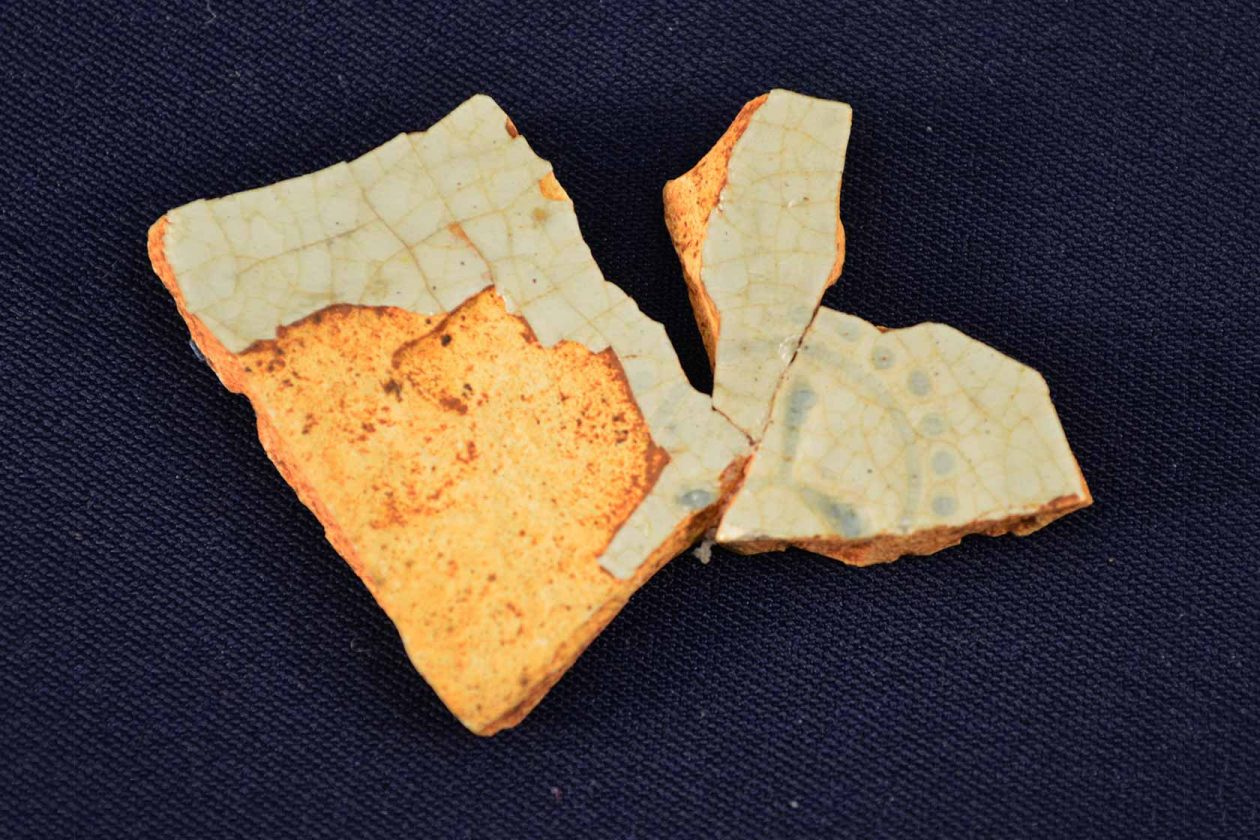 The problem? How to describe this particular image. In order to get as much input and range of terms as possible we asked everyone in the Archaeology Department how they would describe the design on the back of these pearlware sherds. Each suggestion was used as a search term in both the printed encyclopedias and internet searches.

Some of the suggestions were: peace sign, caltrops (my favorite), windmill, flux capacitor, trefoil, nuclear warning symbol, triquetra, and the Mercedes-Benz logo.

The suggestion was provided by Associate Archaeologist Eric Proebsting as the term he had used to describe the same unidentified mark from one of his previous research projects in Arkansas. A short internet search later led us to a pinterest account with numerous pages for images of historical ceramics, furniture, and paintings, which included this page. The accompanying text for one of the transfer printed pitchers provided us with the key to identifying this mark: a manufacturer’s name, Joseph Heath.

Godden’s encyclopedia (1964:318-319) provided four different Joseph or J. Heaths active in the Staffordshire region of England in the nineteenth century. Kowalsky and Kowalsky also listed several Heaths (1999:229-230) and provided photographs of the company’s marks. On two of their examples was the design in question, partially covered with an additional printed mark.

The formal term for this propeller enclosed within the dotted circle is the Impressed Potter’s Wheel. This mark, when unaccompanied by an additional printed mark, dates from 1828 to 1841, the span of operation for Heath’s company. Joseph Heath & Co. was located in the town of Tunstall, the northernmost town of the Staffordshire Potteries in England. Heath’s company produced earthenwares, including printed vessels displaying American historical vistas.

The production dates of these three mended sherds, all from the same context, will help us to generate a date for the layer in which they were found. The dates for when Heath was in business also allow us to begin linking the object to a time period of property ownership. In 1828, as Heath was getting started, Francis Eppes sold Poplar Forest to William Cobbs. This makes it unlikely that this particular vessel was associated with the short Eppes occupation of the property. William Cobbs ran the plantation until turning over its management to his son-in-law Edward Hutter in 1840, a year before the end of Heath’s operation. This allows us to make the interpretation that this ceramic vessel was most likely associated with the early Cobbs family household or the enslaved individuals living on the property at that time.