Annual Refinishing of the Floors

The beginning of a new year can mean only one thing at Poplar Forest.  It’s time for the restoration staff to refinish the floors in the house. Typical of Jefferson, the original floors were not a common floor for Virginia, or even America. In a letter to carpenter John Perry in March 1808 Jefferson writes: “The floor at Poplar Forest being intended for an under floor must be laid with oak. Poplar would not hold the nails, and pine is too distant & dear. All the floors of Europe are of oak, so are the decks of ships. Good nailing will secure it against warping. Perhaps it may be easier done in herring bone, as the hall floor at Monticello was. In that case your sleepers should be but 14 I. from center to center, in order that the plank may be cut into two feet lengths.” By July the floors were being laid.

This letter reveals a number of things. Jefferson specifies a particular material. He makes reference to a European prototype. He indicates his experience with construction techniques. He explains his reasoning to the worker. He mentions the hall at Monticello for the style of the floor. And he specifies the size of lumber for an efficient construction. This example clearly shows Jefferson the experienced builder, concerned with precision and control.

The restoration team believed that the herringbone pattern with a subfloor would only have been done in the central dining room, as in the entrance hall at Monticello. Was it done in a European style? During investigation stains on the brick walls just above the floor level were analyzed and found to be an oil. What made floors European was their finish. They were stained, waxed and highly polished. One of Jefferson’s household servants in Paris was a “frotteur” whose job was polishing the highly waxed floors each day. There was a reference that the floors at Monticello, mostly pine, were “waxed daily.” This was most likely a reference to being polished daily. So were the Poplar Forest floors done in oak in a European style? The definite answer was in the discovery of a piece of tongue-and-groove oak floor board, with an oil stain, that had been used as a baseboard shim in the great re-building after the fire of 1845. 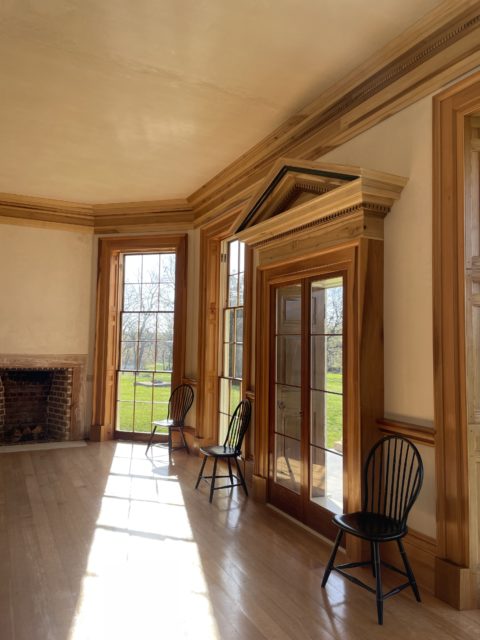