This week’s lectures and field work have revolved around the ways archaeology can fill the holes in our knowledge regarding the culture and personal lives of those enslaved in America. Thomas Jefferson’s views on slavery and his treatment of his own slaves have been well studied. But what was life like from the perspective of those he enslaved? Excavations at Poplar Forest have been able to reveal many details of their lives, some of which is related here on Poplar Forest’s website: https://www.poplarforest.org/learn/archaeology-and-landscape-restoration/plantation-community/ 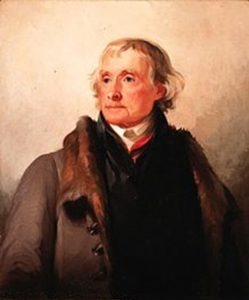 This season, Poplar Forest’s archaeological team and field school students surveyed existing documents, maps, and stream of ownership, as well as what they’ve learned in previous excavations, to try and locate one of the 18th-19th century overseer’s house. The third week of field school continued this quest. With the grace and generosity of a historically curious neighbor, we have been granted permission to excavate a site that appears on at least one map to have been placed near the already established quarter site, which sits just over the private property fence on the northern edge of Poplar Forest property. Though our test pits have not been particularly fruitful, we are finding some small items associated with Thomas Jefferson’s time here. A few pieces of creamware or pearlware, some wrought nails, a buckle, and some melted glass. One of our test pits revealed a sizable collection of slag – debris from a blacksmith shop or coal – though there weren’t any other artifacts to provide a context to connect it to and none of the nearby excavations provided more that might guide us to our goal. This slag was still a fascinating find, as a future season of field work at Poplar Forest is likely to include the search for a Jefferson era blacksmith, which may potentially be located in the same vicinity.

Despite being outside the time frame we seek, we have unearthed a couple of prehistoric stone tools, one nicely worked and clearly used, and one that is clearly formed but not ‘finished.’  Prehistoric Native Americans may have needed to travel distances to acquire the things they needed. They might carry with them several points, to be prepared if something happened to the one they were currently using, or if some other prehistoric problem came their way. The sheer age of these lithic tools makes it a satisfying discovery, despite being completely disconnected from our focus. 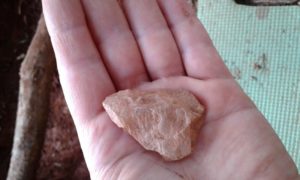 We also made a visit to Monticello this week. After a couple of fascinating lectures about pollen and its ability to remain stable for millions of years, we visited their field school site and took an extended tour of Jefferson’s home, making it up into his third-floor rooms. One of them, pictured below, was a special hideaway for his granddaughters, who spent much of their time at both Monticello and Poplar Forest. As you know if you’ve visited other plantation sites, these grand houses are often much smaller on the inside than they appear. Thomas Jefferson constantly had a house full of relatives and friends. Many visitors had to sleep in alcoves and couches because there simply wasn’t enough room. Cornelia and Ellen found a small attic space and filled it with belongings that made them comfortable, spending their time in the hot and humid attic space, sharing it with rodents and spiders.

With three weeks left, we remain optimistic for finding some semblance of the missing overseer’s house. There are several more test pits to excavate, and all involved are passionate about what we are trying to accomplish. 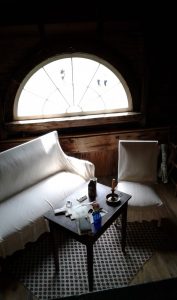