The archaeology department began its 2018 field school this past Monday, welcoming six students and a summer research intern to the museum. Our project this summer focuses on the South Tenant House, a structure built in mid nineteenth century during the Hutter family’s ownership of the Poplar Forest plantation.

The brick South Tenant House stands about 230 feet east of Jefferson’s octagonal house and is about 36ft long and 19ft wide with a central chimney. It originally consisted of four rooms, two up and two down, but has been heavily modified over the years. These modifications included a concrete porch on one side, interior divisions for office space and a modern bathroom on the upper floor, and a full kitchen on the first floor. The support beams surrounding the building were placed after a severe storm in 1993 impacted the structure. 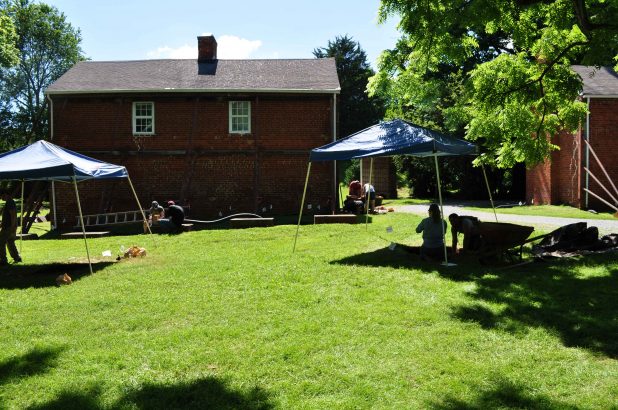 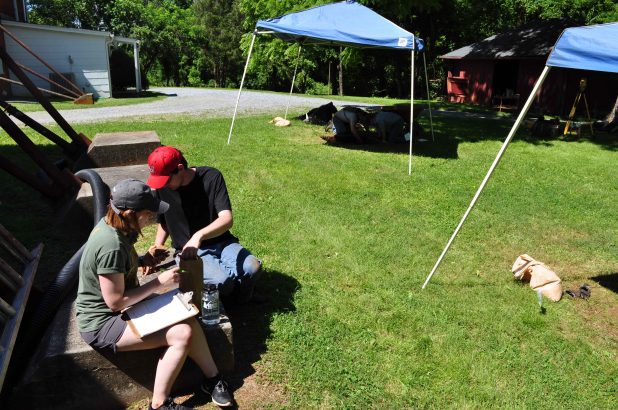 This summer’s field school is the fifth time archaeologists have conducted research at the South Tenant House. The first time was in 1989, which included the excavation of a subfloor pit located beneath the wooden floor of the lower south room. This pit, about 3.5ft by 4ft, was 2.5ft deep and contained a fireplace trammel, tobacco harvesting knife, and a 1851 three-cent piece. The second research project was in response to the damage after the 1993 storm. Poplar Forest archaeologists excavated the areas in which the pedestals for the support beams would be placed. These excavations further supported the hypothesis that the South Tenant House was constructed in the mid nineteenth century. They also uncovered deposits that likely relate to the nearby Sites A and B. A single unit was excavated in 2002 along the 20th century concrete porch, and several additional units were added in 2004 to assess the condition of the wall where bricks had begun to bow out. 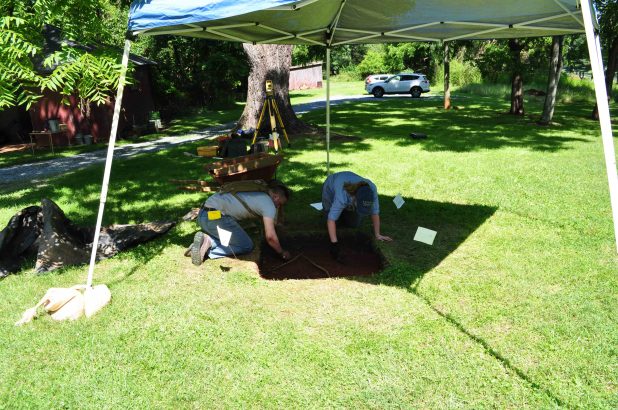 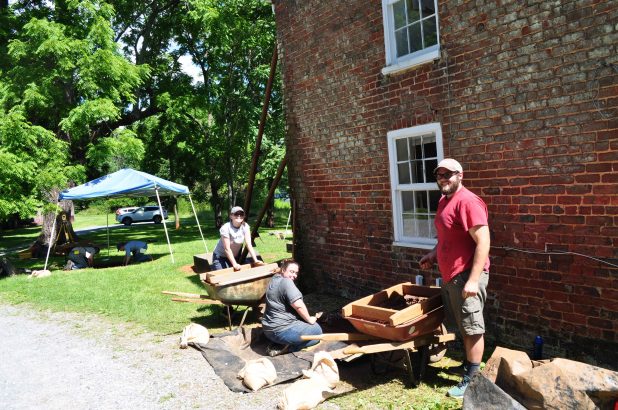 Our current research is in conjunction with the Architectural Restoration department, who are currently at work on the interior of the structure. Their field school concluded last week and we are eager to hear their students’ assessments of the interior of the building. Our research will be focusing on better understanding the lives of the individuals who lived in the structure during the nineteenth century, establishing a more exact date of construction, determining if there are intact historic deposits beneath the modern disturbances, and the use of yard space around the structure.

We currently have several excavation units open and the crew is digging Monday through Friday when they aren’t in the lab attending lectures given by our staff. We will also be out at the site on our two upcoming event days, Juneteenth and July 4th. If you are visiting Poplar Forest stop by the site and see what we’ve found that day.