It is to our great fortune that Thomas Jefferson was a meticulous note taker. Museums such as Colonial Williamsburg credit the reconstruction of the Governor’s Palace to drawings he sketched, and the furniture it contained is known by inventories he wrote. In the case of Poplar Forest, it is the correspondence between craftsmen and Jefferson that provides us with such invaluable details. The letter that serves as the foundation of our project is one that was written to Reuben Perry, a carpenter located in Bedford County, in which Jefferson makes a request for three chimney screens.

Sir,
In addition to the jobs to be done here I must add 3 chimney screens to be made of half inch boards, plain, to fit exactly within the grounds for the architraves of the fireplaces. They are for the West fireplace of the parlour, and the North fireplaces of the East & West rooms, because these rooms having two fireplaces each, the one which has no fire in it draws the smoke of the next room down into the room. The battens are to be within and so shortened as to let the screen be flush on the margin within the ground.…

Supposing that we are Mr. Perry and this letter is all the instruction Mr. Jefferson gave us, we can only really know the length, width and thickness of the screen; that there are battens fastened to the back and shortened to allow for clearance of the brick that sits behind the grounds; and that the screens are described as plain.

For Mr. Perry this instruction may have been sufficient to produce a satisfactory product, but we are not looking to merely produce a chimney screen to prevent smoke from being drafted in, rather we are trying to recreate an example as true to how he made it. Given our research and examination of the construction methods of other 19th-century chimney screens, we determined that our best interpretation of the evidence would produce a chimney screen that was 49″ wide, 45 1/2″ tall and 1/2″ thick; the boards would run horizontal and of widths of about 8-10 inches; the planning of the boards would be finished with a jack plane, which leaves a subtle scalloped surface; and the battens would be clinch-nailed through the face.

We chose to leave a jack-planed finish on the screen due to the context of the construction timeline. Perry was hired to install plaster grounds, which would have plaster run up to it and then ultimately serve as nailing surfaces for the trim. That sort of work would not require a smooth finish and the utilitarian purpose of the screens suggests a similar treatment. 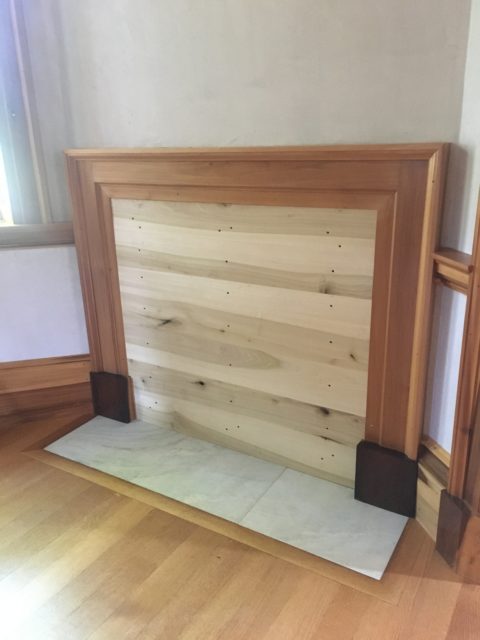