Week 3 has seen an end to our relatively agreeable weather, as both heat and humidity—and an occasional afternoon thunderstorm—become more commonplace. However, our efforts are beginning to pay off as Jefferson’s carriage turnaround slowly materializes under our trowels. The exterior perimeter of the turnaround is now more clearly visible (though much less round than we anticipated), and a recently opened unit is beginning to reveal the interior arc as well.

The cobbled surface is incredibly rough and uneven, partly owing to the irregularity of the cobbled pavers, and partly the result of many years of rutting as well as the action of roots above and below the surface, corrupting the integrity of the paving materials. In some units, hard-packed sand and quartz gravel attest to past attempts to render the surface more even and passable. One visitor, who works with horses, suggested that the horses might prefer the rough cobbled surface even if the carriage passengers did not; the traction afforded by the quartz cobbles might seem more secure to the animals than the slippery packed gravel. 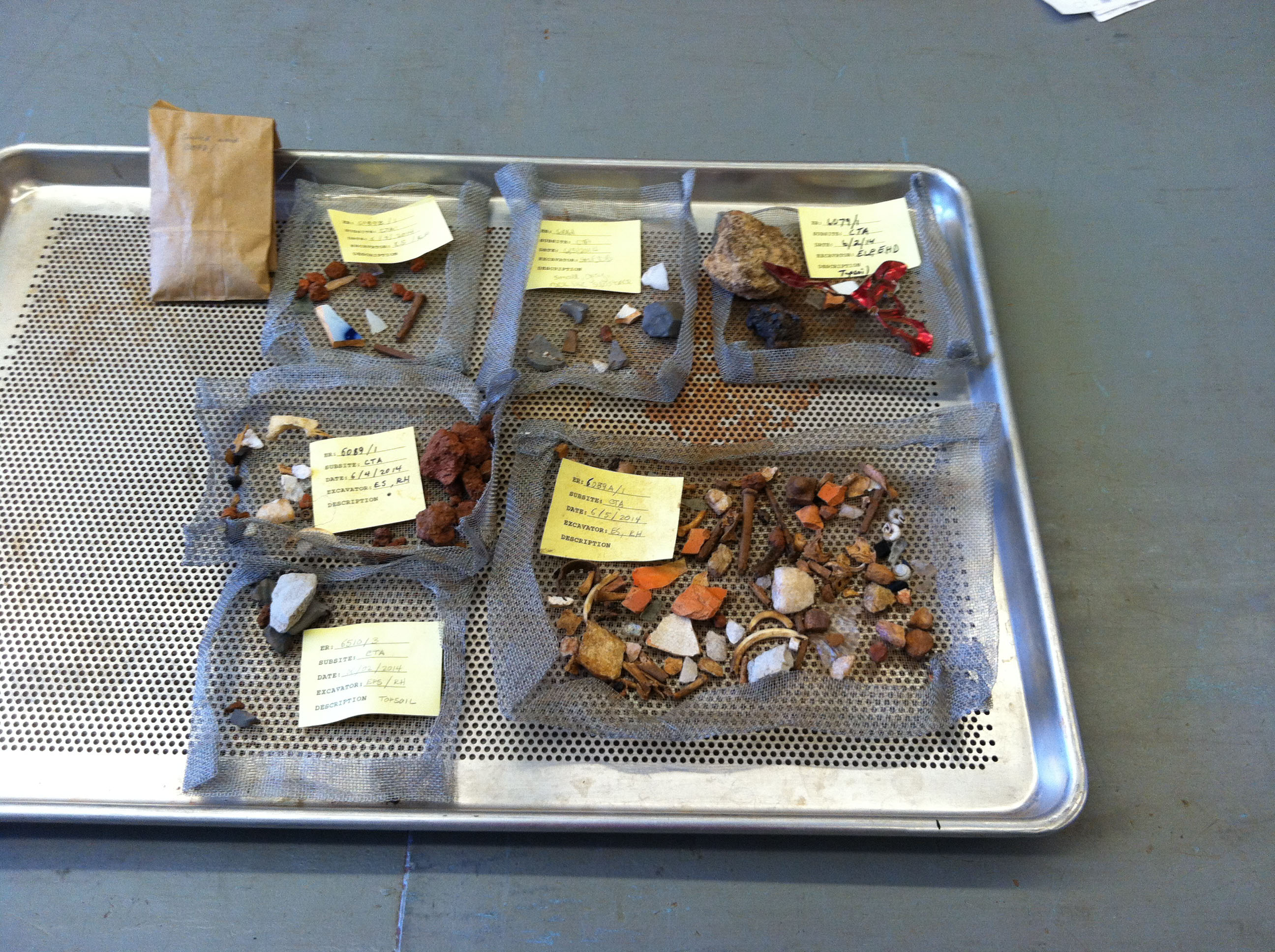 We have also taken turns in the laboratory, washing the artifacts which have surfaced so far in our excavations. Most of the finds are architectural debris from the 1845 fire, such as brick rubble, charred wood, and fragments of broken window glass. A sherd of flow blue ceramic dated one layer to the Hutter era occupation.

On Thursday and Friday, we participated in a time-honored tradition of summer learning: a field trip! We went on the road to observe the work of several other field schools at various sites in northern Virginia: Ferry Farm in Stafford County (VCU Field School); Stratford Hall (University of Mary Washington Field School); and on Friday, Mount Vernon (University of Maryland Field School). At Ferry Farm, director Dave Muraca gave us an energetic overview of the site as well as their enviable conservation laboratory, and some of his favorite artifacts. At Stratford Hall, Dr. Douglas Sanford introduced us to the students who are excavating a kitchen, quarters, and possibly a smokehouse on the edge of the carriage entrance. And at Mount Vernon, Karen Price, the archaeology lab manager, gave us a tour of their laboratory facilities and an overview of their projects before introducing us to Joe Downer, a graduate student who is overseeing the location of grave sites in the slave cemetery.

One thing which was striking to us was the scale of the projects undertaken at the first two sites. Although we now have multiple units open, we have only a matter of a few inches to dig before reaching the Jefferson-era surface. The field schools at Ferry Farm and Stratford Hall are examining sites which have undergone more drastic changes in the centuries since their initial development, including the construction and destruction of one or multiple structures, and agricultural practices such as heavy plowing. As a result, their excavations extend through many more layers of deposition, with some features cutting several feet into the ground. In contrast, the Mount Vernon field school is mapping the locations of grave sites within the slave cemetery. This ground, on a wooded promontory overlooking the wharf, has seen less disturbance over the years and the soil stains marking the burial locations is easily visible at a relatively shallow depth.

Both Ferry Farm and Mount Vernon are utilizing 3-D printing techniques for modelling artifacts and features. At Ferry Farm, Dr. Bernard Means demonstrated the technique of scanning features for 3-D modeling, and we examined samples of artifacts reproduced in plastic through 3-D printing. This technique has much potential in that a “field reference collection” can be maintained without exposing original artifacts, and visitors (especially children) can handle the reproduced artifacts. Plastic scale models of features can be used to document the site even after the excavations have been backfilled. The Mount Vernon lab also utilizes the printed reproductions in museum displays. 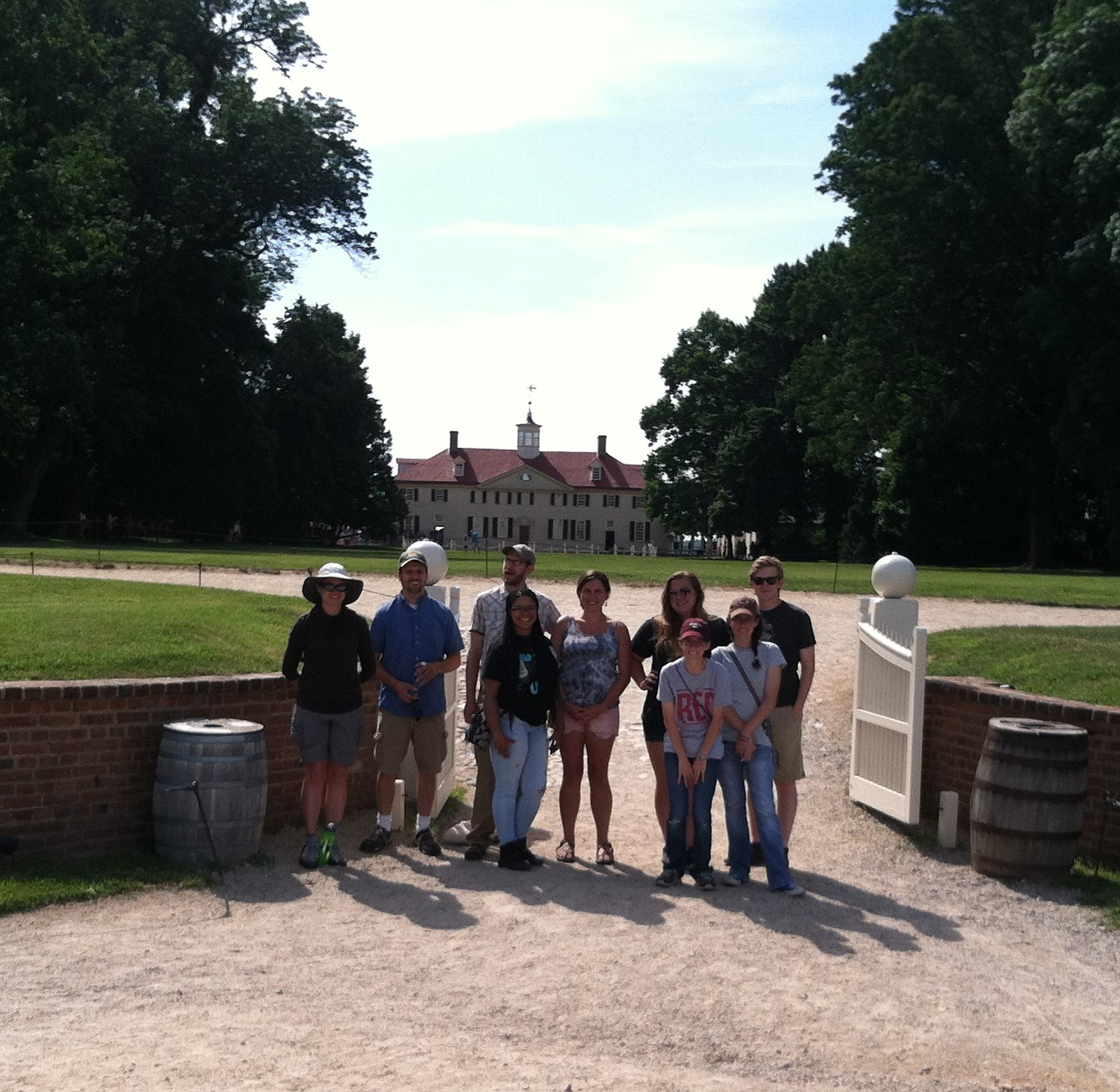 This account just “scratches the surface” with respect to what we have learned and experienced this week. Many thanks to the individuals and sites which gave generously of their time and insight to enhance our perspectives of historical archaeology beyond the carriage turnaround at Poplar Forest. After such a busy week, we were eager to spend Thursday evening by relaxing in the motel pool, playing card games, and celebrating over plates of Mexican food at Carlos O’Kelly’s!