This week is about landscape archaeology. We began learning about the different subfields of archaeology like what pollen analysis can tell us and how GIS (Geographic Information Systems) were used at Poplar Forest to help find where sites could be located. We learned how this technology could assist and we also learned about foodways and zooarchaeology in lectures.

On Monday we continued the work at the Stable Survey 2 Site in South East Curtilage.  Our 2’x2’ units were coming along and features were found at the unit where I was working on with my partner Ashley. There were three features found in our C layer; they were found due to a difference in soil color and texture. On Tuesday we will excavate out the features to see what they are. 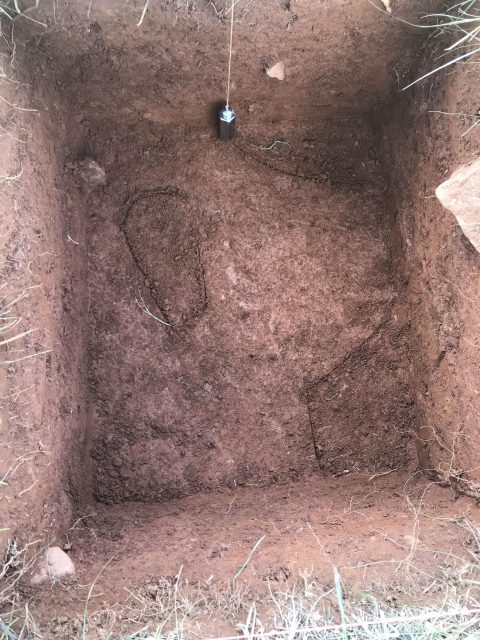 Tuesday we excavated out the features! The one located to the south is thought to possibly be a plow scar because of its more rounded bottom. Both of the other features were superficial and did not go down enough to be considered something culturally made. We did take soil samples from the oval shaped feature and one other so that chemical analysis can be done on them at a later point by an outside lab. In the afternoon I spent the day in the lab learning how to catalog artifacts. I learned about the database program used at Poplar Forest called Rediscovery and we were able to catalog artifacts that were found in the first three weeks. The photo with the piece of pearlware ceramic is being measured in the circles for the database notes. This artifact was one that was found during the first week of field school in one of the first test units. 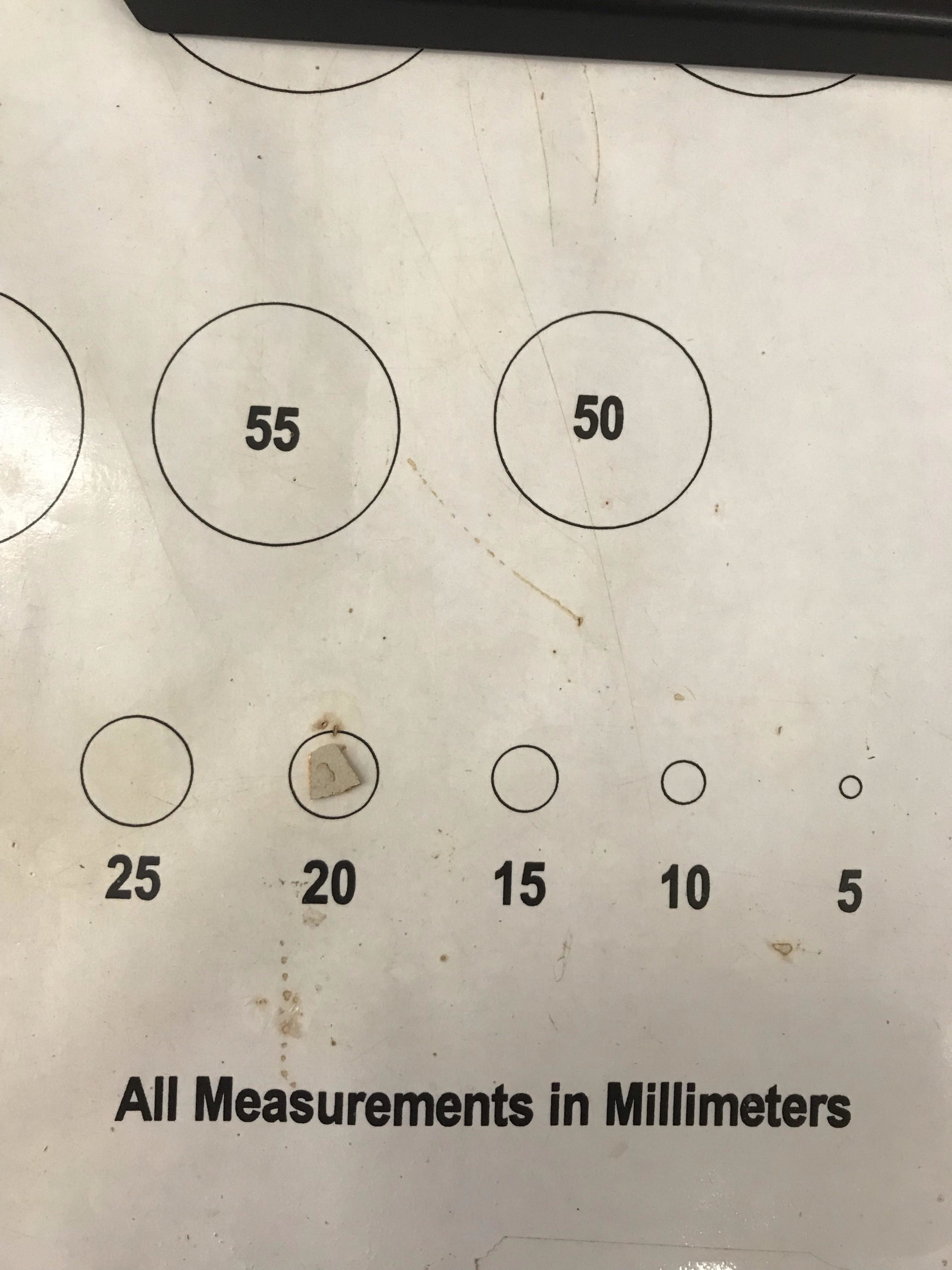 On Wednesday work continued on the 2’x2’ survey units and we are currently on the last set of units. Some of the previous units that had interesting features and were opened up today into 5’x5’ units so we can tell if there is more to what we found in our smaller squares. In my unit we found some glass, cut nails, and charcoal. We also found a really interesting piece of porcelain ceramic which is the bottom of a small plate or saucer. In the photos you can see the numbers 519 written on the back and on the front is a leaf looking pattern that is over glazed. This artifact was found further down in our unit, in the D layer and so we took soil samples for chemical analysis and flotation. 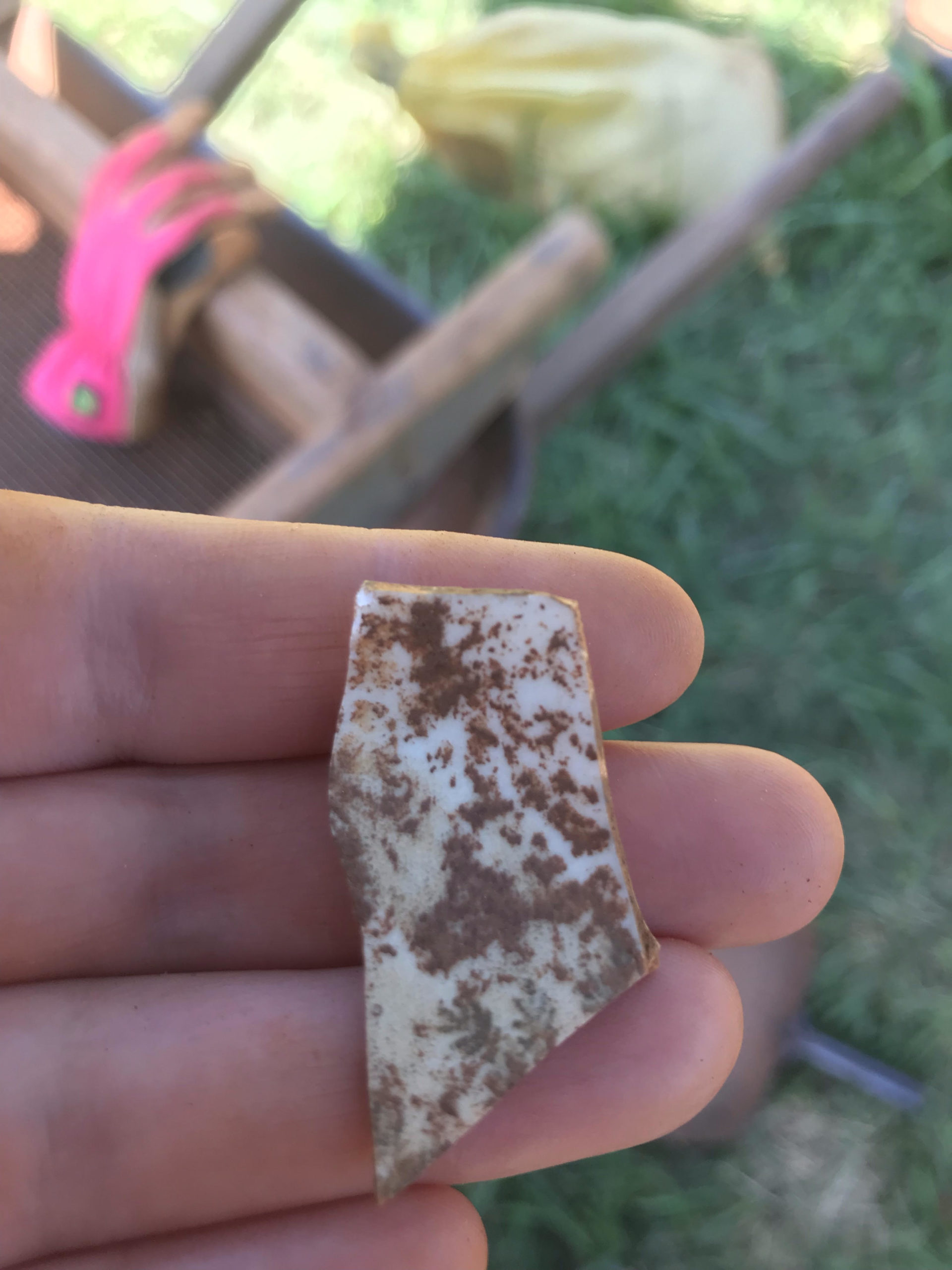 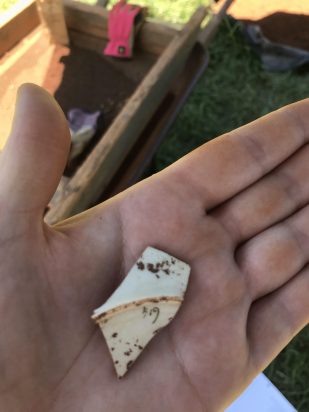 On Thursday in my unit we found another large piece of ceramic but it was not porcelain like the large piece we found. The next layer we took off had a large amount of charcoal and may have been a feature. Due to the possibility of a feature we took soil samples for flotation and for chemical analysis. This unit was ended on the layer with possible features and we lined it with landscaping mesh and filled it half way with soil and covered the unit with plywood and boards in case it is something to come back to in the future.