By Ashley Stoots and staff contributions

It is an anecdotally well-established rule among archaeologists that the final days of an excavation offer the most tantalizing discoveries, and this week proved no exception.  We expanded our understanding of the carriage turnaround in two particularly intriguing areas. This was the final week of field school.  We focused on finishing up the last minute things on our agenda that need to be done.  One section of our excavation was filled back with dirt on Monday, but not before lining our units with fill cloth so future archaeologists have a better idea of where we stopped. 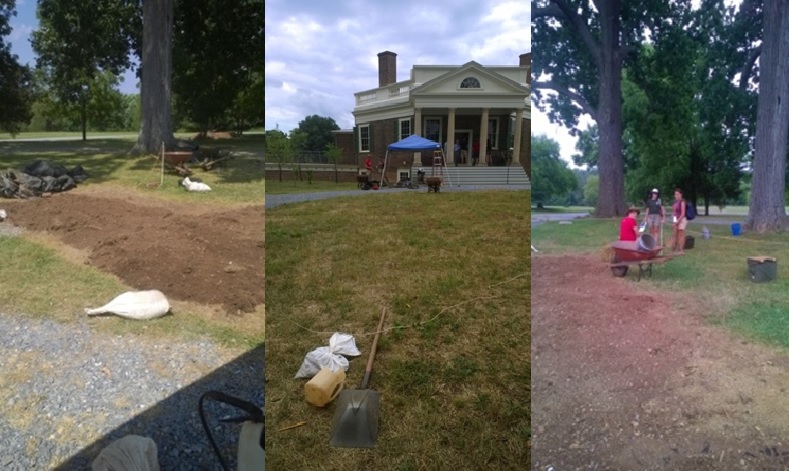 Work on two units in front of the house continued throughout the week.  Cobbles were found there but were much bigger than cobbles that were previously found elsewhere in the carriage turnaround.  They were also crafted from a different type of rock.  Whereas most of the stones revealed so far in the carriage turnaround are quartz, this section of cobbles directly in front of the house consists almost exclusively of schist.  Many visitors this summer have commented on what a jolting experience it must have been to ride over the uneven quartz surface, even if it was packed with sand and gravel.  One look at this newly uncovered schist surface and the contrast is clear.  If this was intentional, why would Thomas Jefferson have had his laborers put these large flat stones in this particular location directly in front of the house?  One possible interpretation is that this area may have functioned as a “parking spot” or disembarking point for people arriving at the retreat house. Though the uneven cobbles throughout the turnaround may have been better for the horses’ feet, perhaps a concession for human comfort was made here! 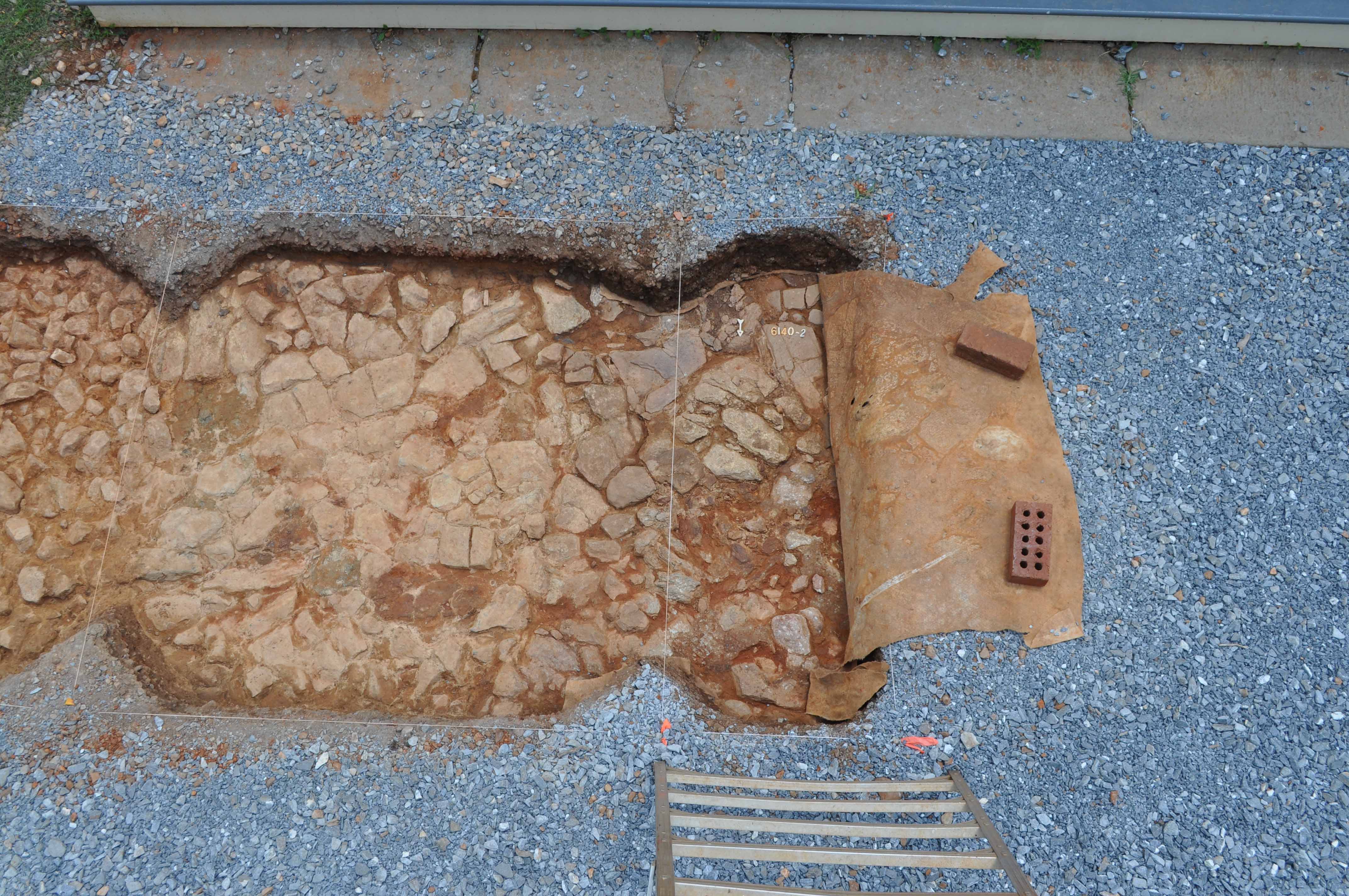 Despite the clock running down on our field school, we were eager to further investigate the carriage turnaround, so a new unit was also opened up.  Cobblestones were also discovered in this unit.  The cobbles in this unit showed evidence of the circular shape at the center of the carriage turnaround., helping us to further define the size and shape of this feature of Poplar Forest’s ornamental landscape.

The other exciting finds were farther away from the house, along the inside edge of the turnaround.  In addition to what we’ve come to consider the usual gravel and quartz cobbles, five bricks were also found at the center edge of the carriage turnaround. Some of the bricks were actually column bricks which was really interesting.  These are a special type of brick with a rounded edge manufactured at Poplar Forest for the columns on the retreat house’s front and back porticos, or porches; rather than purchase expensive marble like that used in the buildings of classical antiquity that so inspired him, Jefferson utilized the abundant local red clay in his architectural designs.  From documentary sources we know that Jefferson’s laborers only performed one firing of column bricks, in 1807.  The bricks we uncovered this week do not have any mortar or other building materials on them, so they are most likely left over from the original construction of the house, allowing us to confidently date this layer as contemporaneous with Thomas Jefferson’s time at Poplar Forest.  It is also interesting to note that of the five bricks we found, the two that are definitely column bricks are actually aligned with the center of the house and are placed in opposite directions, forming a sort of “S” curve.  This is an exciting conclusion to our six weeks of excavation, and our future research will certainly explore why these bricks were placed in this particular spot and oriented in such a way.

In our readings and discussions this week, we took time to reflect on the stories of labor and enslaved people at Poplar Forest.  We also discussed issues of interpretation at public history sites such as this one, and learned about building a resume and finding career opportunities within the fields of archaeology, historic preservation, and museum work.  Overall I think that this field school was a wonderful experience for everyone.  We all worked hard, had fun while doing it and all became good friends.