By the time he came to design and build Poplar Forest, Thomas Jefferson was an experienced builder. He had started constructing his first house, what we refer to as Monticello 1, when he was 26. Jefferson’s design was not only significant for being a very academic and proper study of ancient, Renaissance and modern architecture, it was also ambitious as a house for a bachelor. It is clear from Jefferson’s notes that he had already absorbed many lessons of construction technology.

From that first project onward Jefferson studied construction methods wherever he traveled, always preferring to talk directly to workmen and even laborers. His five years in Europe gave him an enormous amount of new information on how to design and build. Monticello 2 was the most complex single-family house in America, mostly rebuilt and finished in 1809, the same year Jefferson began using the unfinished Poplar Forest retreat.

The innovative and modern features of Poplar Forest included the skylight, Rumford fireplaces, bed alcoves, triple-sash windows fully hung with weights, and Jefferson’s personal invention, the “terras” roof system that allowed for a usable flat deck on the service wing and on the roof. Jefferson also used his construction experience for a superior structure, with fireproof “counter sealing” between each floor and ceiling joist, with brick-nogged wooden stud walls for fireproofing and with four symmetrical chimney masses serving 15 fireplaces and acting as buttresses for the central cube brick walls.

Toward the end of his life when he was constructing the University of Virginia, Jefferson also started using an innovative roof covering: tin-coated iron shingles that provided a lightweight and non-flammable material. Yet like many new products, the shingles were not fully tested and did not perform their basic job, keeping the rain out. Jefferson did not live long enough to solve that problem. 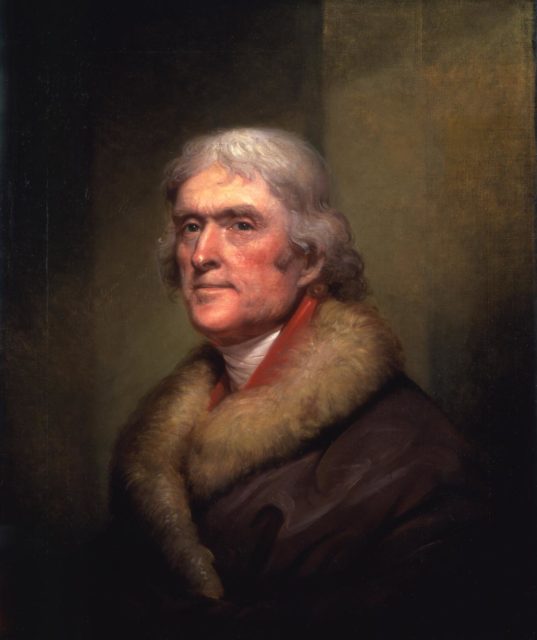