When Poplar Forest archaeologists excavated the area that had once been the kitchen in Jefferson’s Wing of Offices, they found two cast iron grates. The kitchen, and the Wing of Offices around it, had been demolished by the subsequent owners and replaced with two smaller and unconnected outbuildings to serve as cooking and laundering facilities. These cast iron grates, one completely intact, were once part of a substantial masonry stove (Figure 1). These types of stoves were uncommon in the late eighteenth and early nineteenth centuries but some wealthier individuals had variations of this design in their kitchens. Thomas Jefferson was unique in that he owned three, one here at Poplar Forest and two at his primary residence at Monticello. 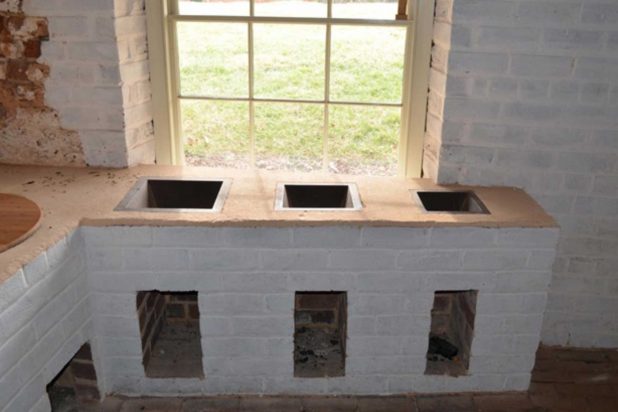 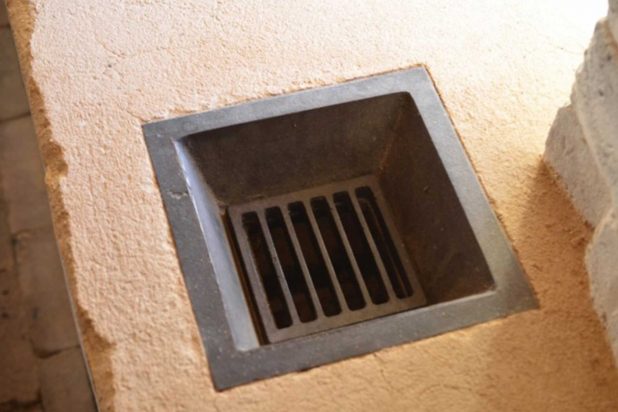 Masonry stoves such as Jefferson’s were designed to give cooks better control over heat when cooking. The overall “box” of the stoves were made of brick with holes of various sizes on the top, analogous with today’s stove burners. Masonry stoves were fitted with cast iron grates, side cheeks, and sometimes cast iron baskets to support coals. Ash would then fall through the grate and collected at the base of the hole, open at the side to allow for removal. Poplar Forest’s reconstructed masonry stove is comprised of three “burners,” much smaller than the current stove a Monticello with eight. The size of our stove is comparable to Jefferson’s earlier masonry stove at Monticello recently uncovered by Monticello’s Department of Archaeology.

Raised cooking surfaces have been in use for centuries. Ancient examples from the Mediterranean region resembled tables made of clay or other unique configurations, sometimes in portable form such as this one. Raised masonry surfaces continued to be used during the European Medieval periods and eventually arrived in the American European Colonies, an example of which you can see at the Frontier Culture Museum in Saunton, VA. The medieval masonry platforms had solid surfaces onto which cooks placed sources of heat and situated cooking vessels, jacks, and associated apparatus as needed. There are several images of raised cooking surfaces in this German text, along with other professions. With no chamber around the coals placed on the surfaces of these raised fireplaces, there was limited control of heat.

Masonry stoves with openings may have appeared as early as the eleventh century in what is now Switzerland and in thirteenth-century Spain.1 The first recorded example of Jefferson’s type of masonry stove appeared in Bartolomeo Scappi’s cooking manual published in 1570 (Figure 2), which included numerous recipes and detailed drawings of kitchen layouts and accoutrement.2 Scappi was a famous chef in his time, acting as the papal chef for Pope Pius V. During his tenure at the papal residence the kitchens there gained a masonry stove such as the one depicted in his manual. Scappi refers to these stoves as morello per pignatte, a “low wall for soup pots”, or simply morello. 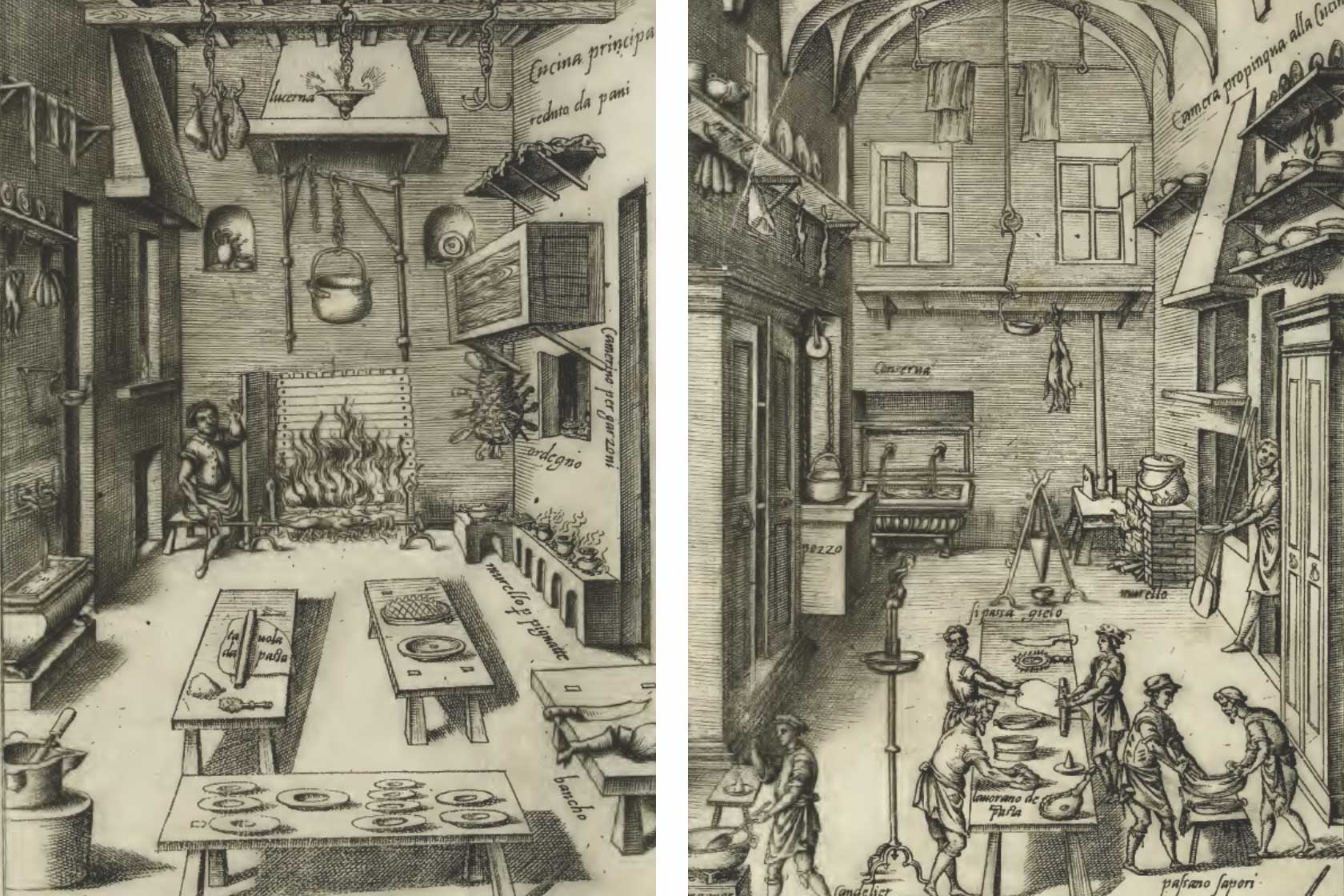 By the early 1600s many French households contained a version of the morello per pignatte called potagers, a name likely derived from “pottage,” a hearty stew-like meal common at wealthy and poor tables from the Middle Ages into the 17th century. Many potagers were simple masonry structures, others were fitted with metal gratings to hold coals in place at the top of tall shafts.3 Potagers were sometimes constructed near fireplaces so that the transferring of coals from one to the other was relatively easy. According to Pierre Bullet, a seventeenth-century architect, the potager should be constructed of brick and mortar, however, he commented that many were made with plaster and tiles instead. Bullet described the ideal structure as measuring about two or two and half feet wide and standing about three feet tall.4 More elaborate potagers had several grated openings, allowing for the simultaneous cooking of dishes requiring different temperatures, achieved through the directional heating provided by the holes.5 The ability to exercise better control over heat help to aid the rising prominence of French ragout and fricassee dishes. Potagers were also well suited for preparing omelets, custards, satueeing, and confections (Figure 3).6 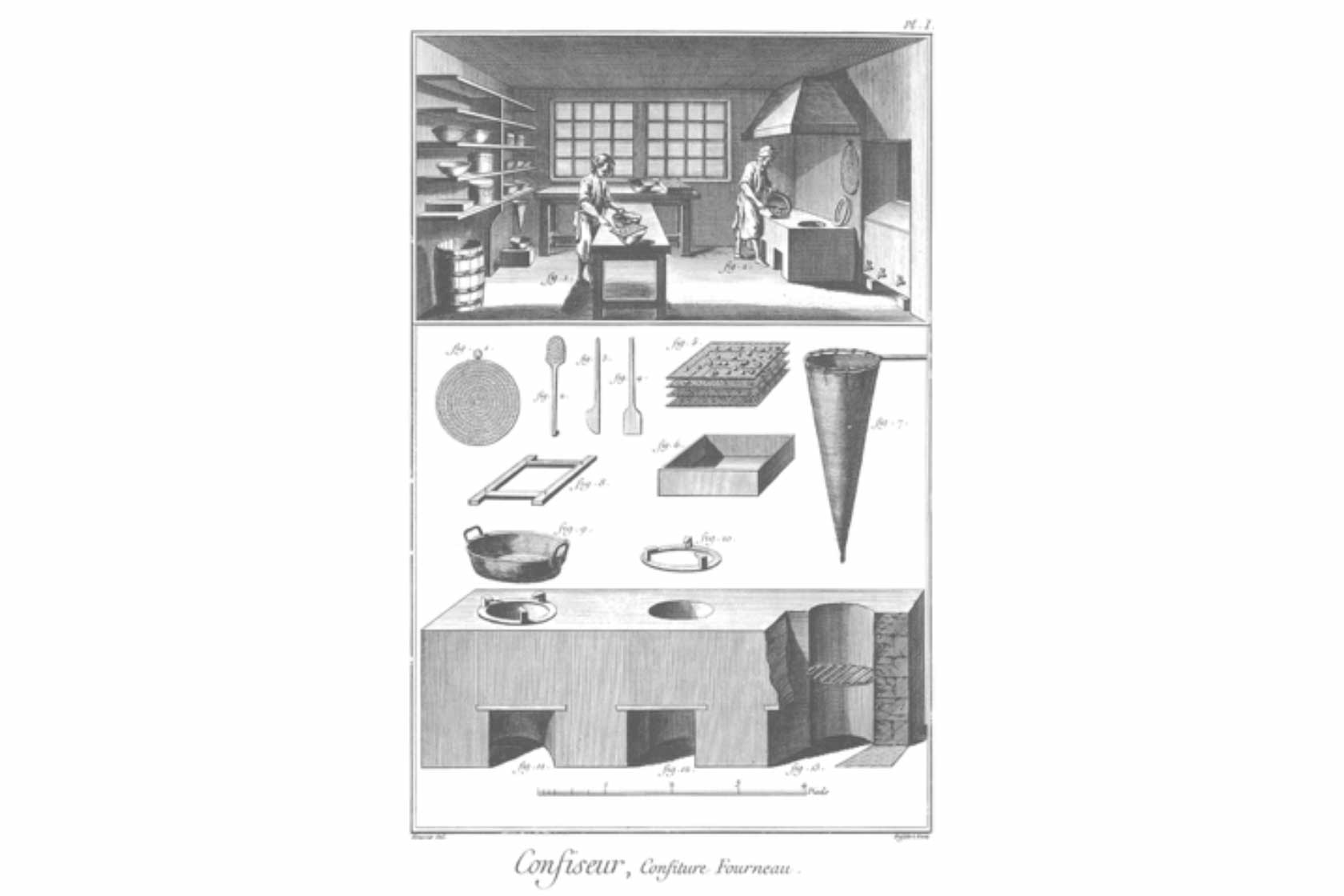 One of the earliest known charcoal burning masonry stoves in Britain were built for Hampton Court Palace. The enormous expansion of the palace in the 1530s, which included the kitchen facilities, may have included the large masonry stove. However, the stove may have been constructed later in the seventeenth century.7 This very large masonry stove is still in use as part of the historical interpretations at the palace. Historic Royal Palaces has posted a series of Georgian-era cookery videos on YouTube featuring the stove; take a look at how to make “mutton smoured in a frying panne.” Kew Palace, a royal residence from the 1720s to the 1810s and reopened to the public in 2012, also contained a masonry stove and like Hampton Court Palace hosts a series of historical and cookery videos online.

Potager stoves became a part of the French Enlightenment kitchen. Kitchens became seen as emitters of dangerous fumes from burning charcoal and corrupted waste water. Concerned with issues of smoke and odors, potagers began to be located under kitchen windows, rather than in various locations in earlier kitchens. While the masonry portions of potagers were not portable, the iron grates and cheeks fitted to the holes were, and were often listed as part of the batterie de cuisine, or the collection of kitchen equipment that included prized copper cooking vessels, when contents were sold.8 By the eighteenth century, masonry stoves were depicted in British architectural plan books, mostly for large mansions, but occasionally in more modestly sized houses.9 While Jefferson may have seen masonry stoves in the Williamsburg Governor’s Palace prior to his time as Minister to France, it was these potagers that he would have observed during his tenure there.

In addition to use as a cooking surface, masonry stoves were also used in in medieval alchemical and metallurgy pursuits, and eventually in early modern chemistry. The athanor, a design and term derived from Arabic sources, functioned as a scientific oven, providing heat for such processes as the distillation of acids and the processing of metals.

Renovations of the University of Virginia’s Rotunda in 2015 uncovered a hearth and masonry stove constructed for chemistry labs. The furnace and stoves were constructed at the professor’s request, as “such experiments as require the use of furnaces, cannot be exhibited in his ordinary lecturing room, we therefore prepare the rooms under the Oval rooms of the ground floor of the Rotunda for furnaces, stoves Etc…”10 The stove and furnace structure was made in a semi-circle and the gratings are very similar to those Jefferson had made for his cooking stoves. You can read more about the discovery of the UVA chemical hearth and stove and see close-up photos of it at NPR.

Masonry stoves did not catch on as well as they did in France, and known instances of these cooking surfaces are isolated to the households of those with economic means. One of the earliest ones stands in the kitchen at the Wentworth-Coolidge mansion in Portsmouth, NH, home of royal governor Benning Wentworth, in office from 1741 to 1767. A list with links of similar historic sites, such as Colonial Williamsburg, with masonry stoves is included below.

A masonry stove was present in one of the earliest presidential houses in the young United States. In 1790 George Washington leased the Macomb House in New York City. The mansion was in the process of being vacated by the departing French foreign delegation. Washington was offered to purchase many of the moveable furnishings within the home, of which he bought many including furniture, dishes, a bidet, and six iron pieces associated with “stew Holes,”11 indicating that the now-destroyed mansion had a masonry stove. Alexander Hamilton’s Grange also contained a masonry stove, for which he paid $7.50 for the iron grates alone. The architect, John McComb, Jr., proposed the stove, referred to as “stew holes,” in 1801, but the stove was torn down in February of 1803 for the cost of $3.25.12 Charles Wilson Peale constructed a masonry stove in the style of Benjamin Thompson, also known as Count Rumford, with modified fireplace flues and enclosed pots, known as digesting pots13, set into the openings.14

Jefferson was known for his fondness of French cuisine and many of these dishes were best prepared over masonry stoves. His earliest reference to masonry stoves was in an architectural sketch drawn between 1768 and 1770 of the Monticello South Pavilion kitchen. This drawing notes a stove with five openings situated across a wall opposite a staircase. Recent excavations at Monticello in the South Pavilion kitchen revealed a masonry stove with four stew holes. This room was covered with several feet of fill to raise to the level of the South Wing in 1809, burying this stove. Analysis of this excavation is still ongoing, but you can learn more about the project. 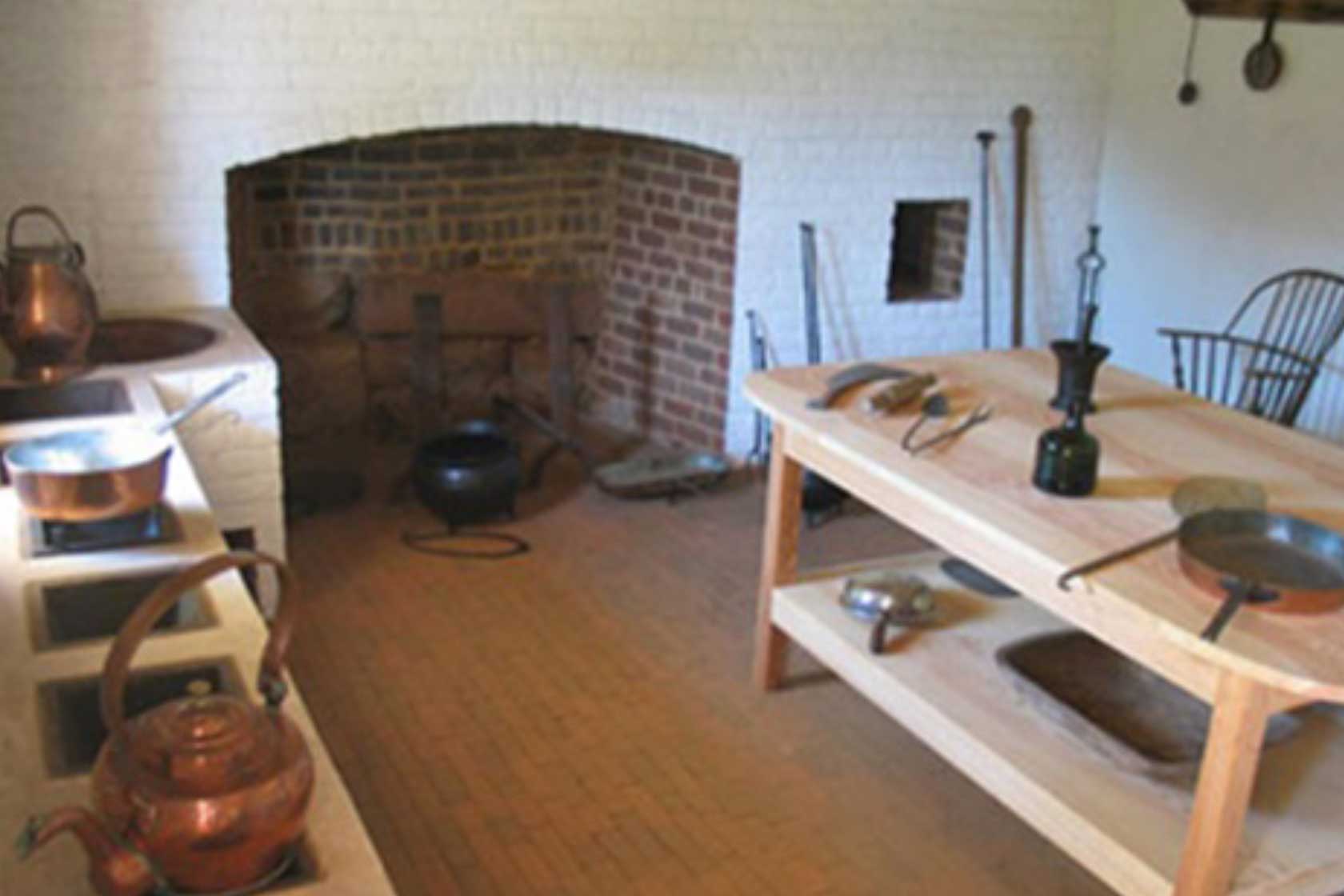 In 1804, while serving as president, Jefferson paid $1.47 to Henry Foxall for “Stew Hole & Grate” for the President’s House.15 After Jefferson’s presidency ended he inquired to Foxall about purchasing iron gratings for his home at Monticello.

Sir,
The cook which I had in Washington (mr Julien) and who is now with me for a time, informs me you made for the President’s kitchen some irons of casting for the stoves or stew-holes in the kitchen, in which the box-part & the grille or bars were all solid together, and that you made them of three sizes. I must ask the favor of you to make 8. for me, to wit, 2. of the largest size & 3 of the middle & 3 of the smallest size, and forward them for me to Richmond…I must pray you to do it without delay, if convenient, as they are indispensable in a kitchen. To Henry Foxall, Mar. 24. 09.16

The grating and cheeks described by Jefferson resembles French versions, in which the two are one piece. Foxall replied that he made them as two pieces so as to make the replacement of the grating, which wore faster, easier.17 Jefferson received the iron components in the spring of 1809, ensuring the continuation of the French-style cuisine prepared by enslaved cooks Edith Fossett and Fanny Hern, who had learned from White House chef Honoré Julien.

Evidence of a masonry stove at Poplar Forest was found in 1989 during the initial Wing of Offices excavations (Figure 5). The first was a corner fragment of an iron stew hole grate found in a topsoil layer. A second complete grate was found the following year in a layer predating the 1840 destruction of the Wing (Figure 6). Both of these contexts are in the central area of the Wing, what is now the reconstructed kitchen, near the north wall. The grates reside in the Archaeology Department’s dry storage; large cabinets with seals that create micro-climates. These cabinets enable us to control the amount of moisture our conserved and unconserved metals are exposed to. Both grates have been conserved and sealed to prevent flaking and disintegration. 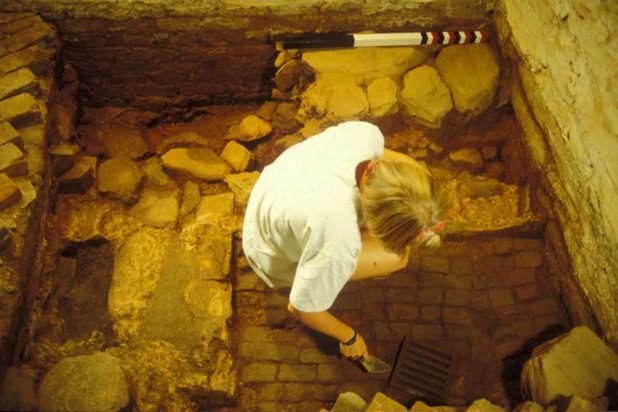 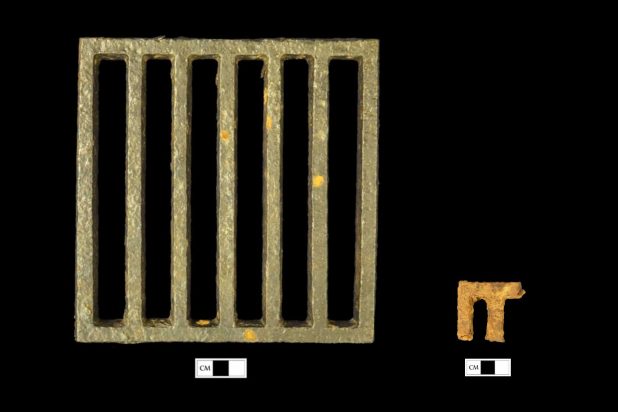 Today, the kitchen has been restored to the Jefferson period with three stew openings under the exterior window and a set kettle in the corner. Like the rest of the kitchen, the stove and the set kettle are fully operational and are in use at many of our events.

Links to Other Masonry Stoves