Between late 2018 and mid-2020 one of the biggest pieces of the restoration took shape. Pieces of the old-growth heart poplar lumber that had been hand-molded into individual parts by the restoration craftsmen were put together to form a Tuscan order entablature. The Tuscan order, the lowest of the classical Roman orders of architecture, now crown the entrance hallway, the Northwest Chamber, and Jefferson’s bedchamber.

These classical moldings were very important elements for Jefferson, who spent his life in the study and use of classical orders. John Hemmings and his nephews Beverly, Madison and Eston (believed by most historians to be the offspring of Thomas Jefferson and Sally Hemings) produced all the interior finished trim on-site and put the parts together just as our own craftsmen have done.

Once all Tuscan entablature was installed in the most private rooms of the house, work moved to the dining room where its Doric entablature was installed. Because of the precise joinery and the height at which the craftsmen worked, all joinery was pre-assembled, labeled, disassembled, and then installed one piece at a time. While this process may seem arduous, it was imperative to a smooth installation, one which has been a long time coming.

Entablatures consist of three parts: the lower architrave, the middle frieze and the top cornice. The Roman Doric order frieze is typically composed of alternating triglyph moldings and blank metope panels. It is the metope panels that contain the decorative ornaments Jefferson had ordered from English sculptor William Coffee in New York City.

When Jefferson made his last trip to Poplar Forest in May of 1823 it was to turn over his retreat to grandson Francis Eppes and his new bride, Elizabeth. On that visit Jefferson would have been overjoyed to see the dining room entablature that John Hemmings and his nephews had made and installed. The frieze ornaments were yet to grace the entablature but it was still an impressive feature and one important to Jefferson. 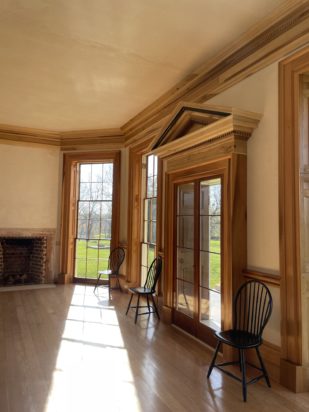 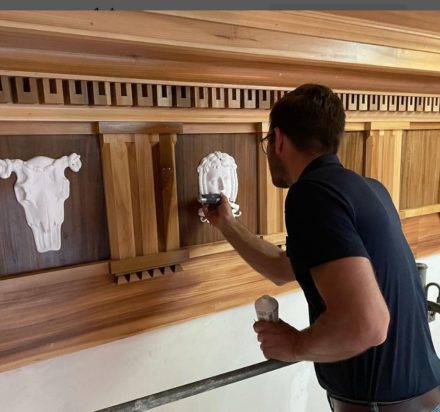 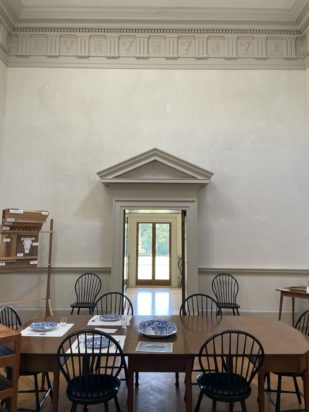