Stick a Fork in it

The fork is the youngest of the basic dining utensils and once considered a scandalous and indulgent item.

The earliest forks were not used for delivering food to the mouth, but rather as cooking and carving tools in the preparation and serving of foods. The word “fork” is derived from one of two Latin terms: furca meaning pitch fork or fuscincula, a large food preparation fork (Milliken 1957:184; Von Drachenfels 2000:196). These early models were used in Ancient Egypt, Greece and Rome. Forks designed for the purpose of moving food from a plate to the mouth first appeared in the Middle East and Byzantine Empire around the 7th century in wealthy and noble households (Ward 2009).

In the 11th century, a Byzantine princess arrived in Venice to marry a nobleman. She brought with her a set of gold forks which she used to eat at the marriage banquet. This use of a new utensil outraged the local clergy, who considered her actions to be a debauched affront to the proper way of eating with one’s fingers. When she tragically died of the plague, one clergyman remarked that her death was God’s punishment for her extravagant method of eating (von Drachenfals 2000:196; Ward 2009).

The fork continued to receive mixed reviews in Europe throughout the Middle Ages and Renaissance, partly attributed to their association with courtesans employing them to eat candied fruits to prevent the staining of the fingers. Forks began appearing as more mundane items in Italian cookbooks in the 1400s, and other nobility in Europe began to adopt the forks, even the scandalous suckett forks used for candied fruits, in their eating practices. Catherine de Medici brought forks with her to France when she married Henry II and the practice was adopted by the French upper classes (Ward 2009). This new dining craze was satirized in the early 17th century, painting the French aristocrats as silly as they scattered difficult to spear food around their plates with the widely spaced two-tined instrument (Visser 1992).

Thomas Coryate, an Englishman, traveled through Europe during the 17th century and observed the strange fork-using dining habits of continental people. Coryate described the Italian style of eating in his travel accounts. The practice was attributed to standards of cleanliness, as the Italians did not want the potentially unclean fingers of their dining companions to touch the food they shared. To use one’s fingers would have been considered to be very poor manners. Coryate adopted this style of eating while abroad and continued to do so once at home in England, despite the teasing he received from his peers (Defenbacher et al 1951:22,30; Ward 2009).

The use of the fork spread throughout Europe and the colonies in the 17th century, becoming a popular personal possession. New forms were created with more tines and more bowl-like shapes for the shoulders. A folding version was also created. (Defenbacher et al 1951:30; Ward 2009).

Forks were a well-established part of dining practices during Jefferson’s time. In colonial America, forks were used for serving and anchoring food so that it could be cut with the knife. When dining, a person would use the sharp point of a table knife to spear a piece of food, and then eat directly from the knife. Wealthier classes had more access to the various forms and styles of cutlery, while the use of the fork was slower to catch on amongst those with less economic means. It is interesting to note that knives, in general, became more rounded as forks increased in popularity (Hume 1969: 177,178, 182, see Fig. 63 for a handy drawing of knives and forks). 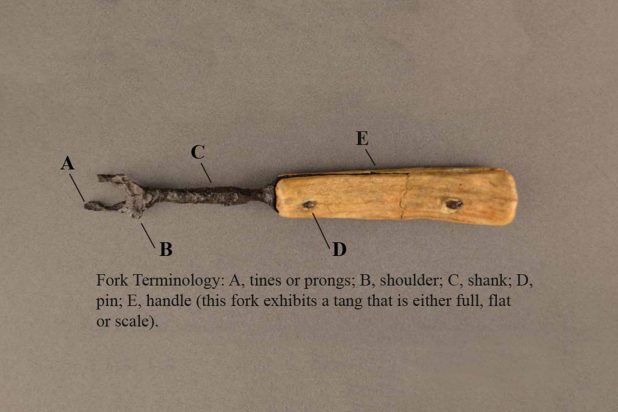 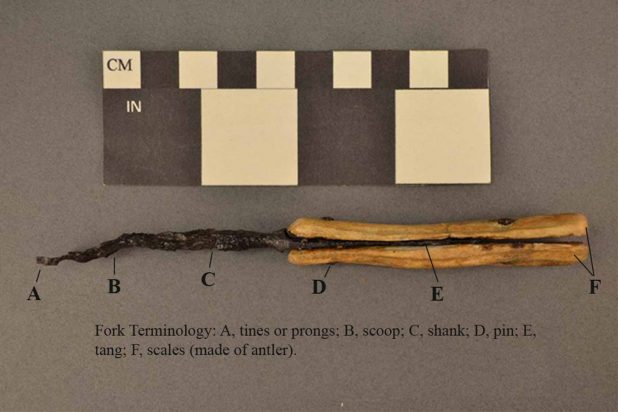 While traveling in Paris in 1784, Thomas Jefferson purchased two dozen silver forks that were designed with a fiddle and thread pattern (Stein 1993:318). He brought this set of cutlery, which also included spoons, back to the United States (Stein 2005:74). Jefferson’s granddaughter Ellen Randolph Coolidge noted her grandfather’s use of these utensils: “He [Jefferson] ate with a silver fork when other people used steel” (1856).

More information about Jefferson’s silver table forks can be found at the Monticello website: http://tinyurl.com/Jefferson-Forks

Today, the majority of forks are composed of one solid piece of metal (or even plastic). But in the past, many different materials would be used to make up one piece of cutlery.    The main part of the fork would be made of metal (such as silver, steel, iron, or an alloy). The handle would likely be fashioned out of another material such as bone (including antler and horn), wood, rubber (1860s), or celluloid (1870s) (Dunning 2000:44). More expensive materials for the handle include silver, tortoise shell, ivory, and mother of pearl (Dunning 2000:32).

The variety of materials used has changed over time, as well as the styles and forms of cutlery. These stylistic differences allow us to establish a range of dates for cutlery items, which we can use to better understand the archaeological context of the artifacts that we find.

Excavations of the Wing of Offices yielded several forks, in varying degrees of completeness. All of these forks are examples of composite cutlery, meaning that the handles were comprised of a material different from the tines and shank. These forks also predate the adoption of the mechanized stamping process that began to dominate the market after the Civil War (Dunning 2000:32,38). 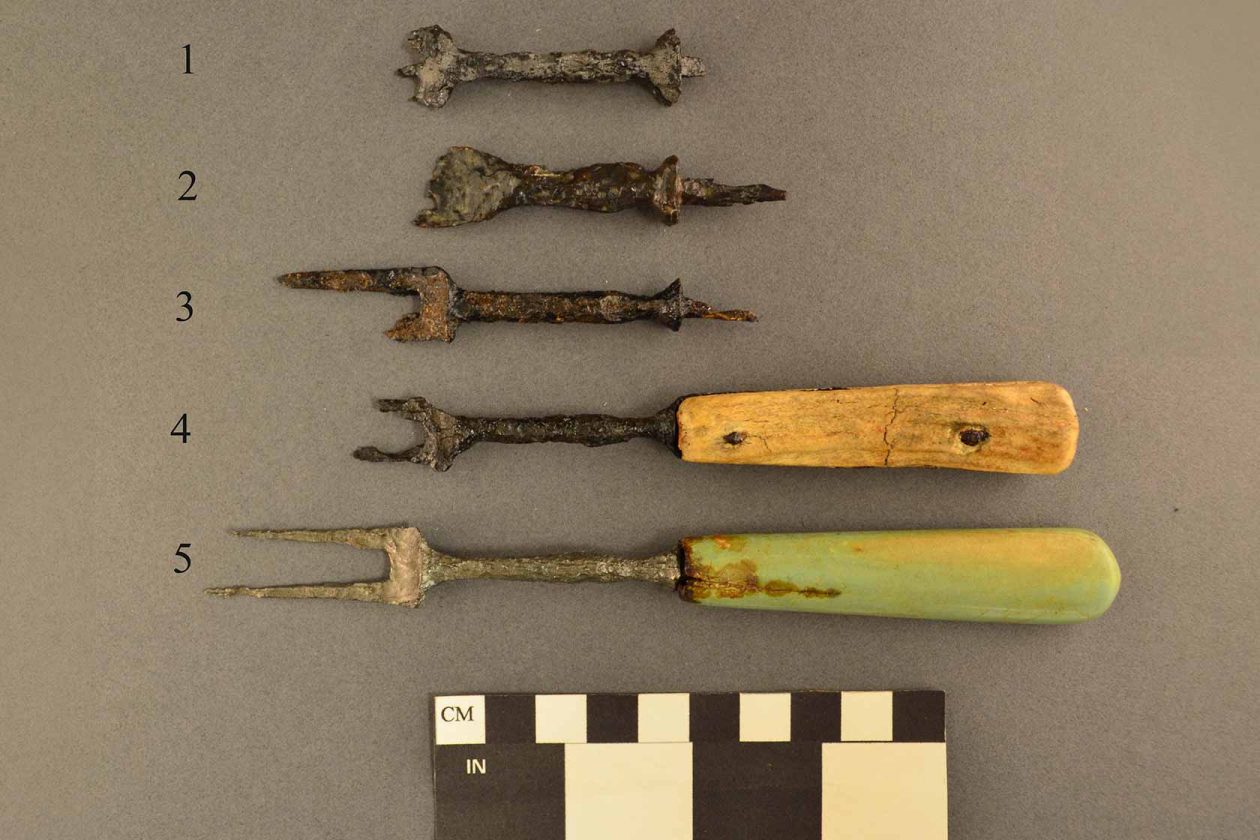 1. Partial fragment of a three tined fork that was found within the kitchen yard space of the Wing of Offices. The tines and the tang are missing, however, you can see along the base where portions of the three tines remain.
2. Three-tined fork, which is difficult to discern because only the base of the tines is left. This fork was found in an excavation unit within the kitchen area of the Wing.
3. Two-tined fork. The shank is complete but only portions of the tines survive. While working on the restoration of the Wing, brick masons discovered this artifact sticking out of an in situ brick located along the south wall.
4. A more complete version of a two-tined fork. It has a round, scooped shoulder. The handle is made of antler and consists of two scales which are pinned to each side of the flat metal tang. The tang appears to have broken off halfway down the handle, and the handle itself ends in a flat or squared butt (without cap).
5. This complete bone-handled fork was found at the base of a wall. The bone has been stained green, possibly to mimic the fashion of Chinese celadon porcelain. It contains 2 prongs, a scooped shoulder, and a rat-tail tang (see figure below). Green stained bone and ivory handles became popular in the late 1760s (Dunning 2000:36). 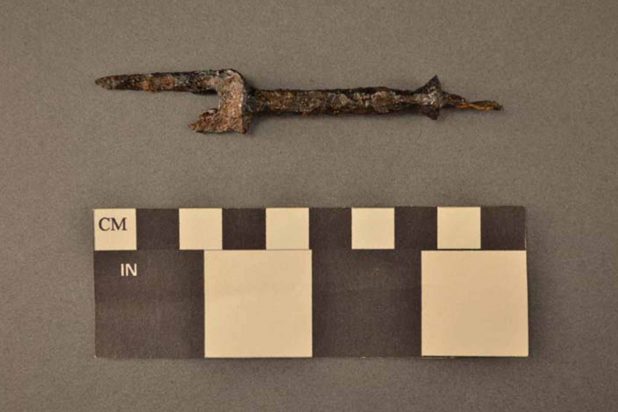 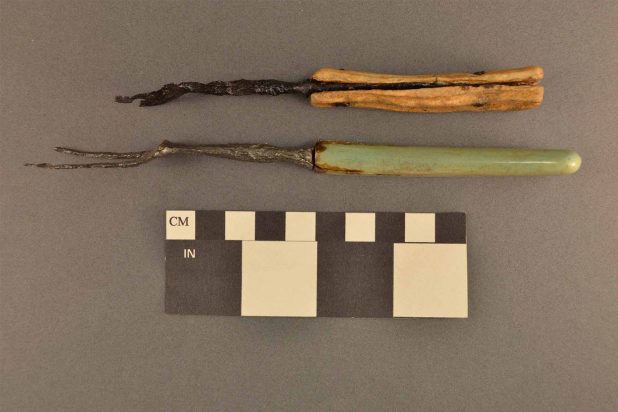 Diversity of fork shapes, types, and methods of decoration increased exponentially by the mid nineteenth century. New methods of industrialized manufacture, such as mass production and electroplating, allowed for more people to access these eating utensils. Forks became designed for highly specialized purposes such as salads, seafood, fruits, oysters, dinner, pastries and even ice cream, leading some of us to the modern dinner party conundrum of “which fork do I use?”  (von Drachenfels 2000; Williams 1996). 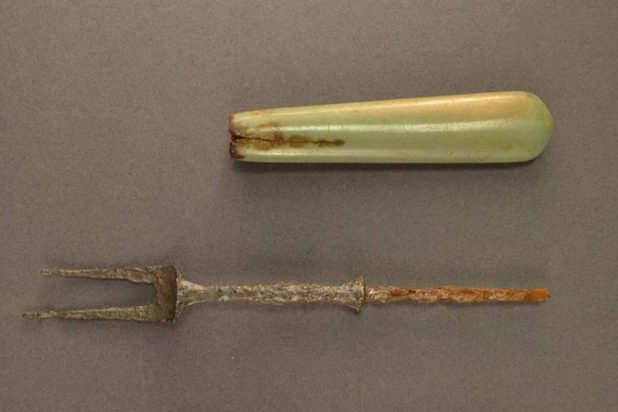 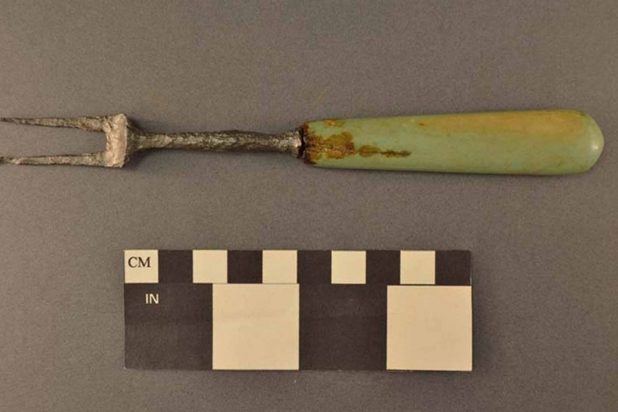