The Beauty and Resilience of Old-Growth Wood

As our restoration craftsmen created and installed the entablatures, we were reminded of the specie and quality of using salvaged old-growth poplar, the same material Jefferson used. The heartwood of old-growth poplar was just as prized for exterior elements as was old-growth pine. Jefferson specified that heart poplar should be used for the balusters in the roof balustrade. It was also a good choice for structural members like joists and rafters, and for moldings.

Jefferson had sited the retreat house near an old-growth forest, “the Poplar Forest,” and was harvesting trees to be sent to water-powered mills to be cut. When the mills were not running due to low water the lumber was cut by hand by the enslaved workers. When the house is rebuilt by the Cobbs/Hutter family after a disastrous fire in 1845, all of the structural members in the house were old-growth poplar from the nearby woods and still being cut by hand using enslaved labor. Some of this 1846 poplar is being used for the moldings in the house.

The quality and historic use of poplar surprises people because poplar lumber today would not be anyone’s choice for exterior elements. Why is this? The answer is that to make use of the slow-growth heartwood in a 200- to 300-year-old poplar tree you have to harvest the tree while it is still living. Waiting for the tree to reach its natural lifespan reveals an unfortunate trick of nature: the center heartwood has deteriorated and disappears. Today we prize large old trees and work to keep them standing as long as possible. Jefferson loved trees and nature, and even planted poplar trees, that he called the Junos of our groves, near the house. For him it was a balance of using the right natural resource, and admiring what nature had produced. 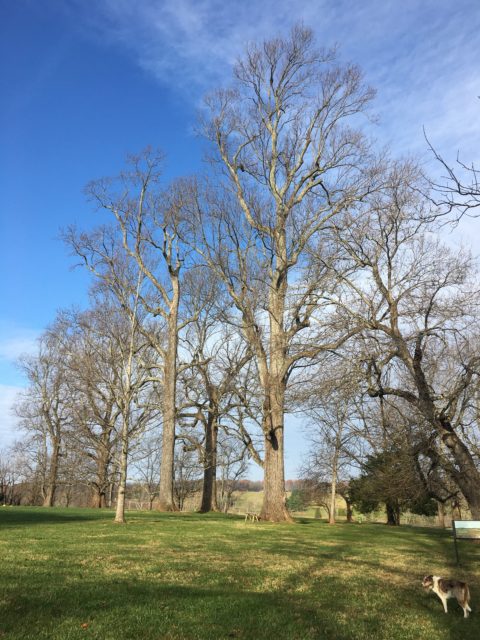