The History and Restoration of Entablature Ornaments

On March 16, 1820, Thomas Jefferson wrote from Monticello to his overseer at Poplar Forest to say that William Coffee would be dropping by to see the house. “He is a very eminent artist in statuary and painting and a very estimable man, and will call at P.F. to see the house and if he should find it convenient to make a stage of it, or a short resting place, I should be glad that Hanah should accommodate him there the best she can…I have a great regard for him.”

Jefferson had been reluctant to sit for Coffee for a terra cotta bust when a friend in Richmond introduced him the artist. Jefferson had had a bad experience with a plaster life mask from another artist that stuck to his face and nearly suffocated him. Jefferson reluctantly allowed the English sculptor and artist from New York City to visit him at Monticello and as his letter indicates, was very taken with him.

Sharing his private retreat with someone was not usual but it was important that Coffee see the house, especially the dining room and parlor, for which he would come to make the terra cotta ornaments for the Doric and Ionic entablatures. He eventually made these ornaments at the same time that he made ornaments for all of the University of Virginia buildings. As our own craftsmen currently make the wooden parts for the large dining room entablature they will be repeating what John Hemmings and his three nephew apprentices were constructing originally as the significant armature that would hold the Coffee ornaments.

As Jefferson stated to Coffee about the dining room entablature in which he had added some extra ornaments, “it is a fancy which I can indulge in my own case, altho, in a public work I feel bound to follow authority strictly.” The “fancy” meant it was for Jefferson’s personal pleasure, just like that of his beloved retreat.

Travis McDonald worked closely in conjunction with the University of Virginia and the architects at Mesick Cohen Wilson Baker (MCWB) to develop an accurate model of the Apollo and the Bucrania for the dining room’s entablature. The sculptor William Coffee made decorations for the entablatures at UVA and Poplar Forest at the same time, so both types can be found at UVA, but in most cases the build-up of paint has muddled the details, making it difficult to get a clear digital scan. Luckily the conservator at UVA was able to find some examples with clear details. MCWB has taken these digital scans from UVA and used them to make full-size 3D printed versions of both. 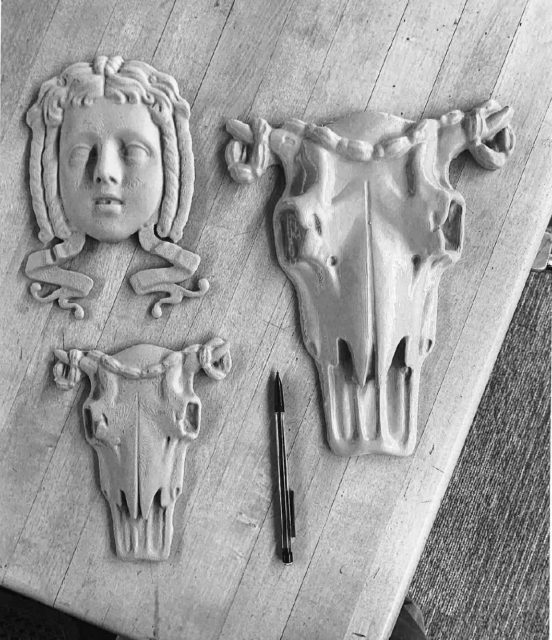