June 20th began the third week of archaeology field school at Poplar Forest, in which students gained an introduction into the field of Landscape and Environmental archaeology.  Landscape archaeology is the study of the ways in which people shaped and were shaped by the world in which they lived over time.  By studying this interaction, archaeologists can gain a number of insights into the behavior of a civilization at a given time.  Sites of interest to landscape archaeologists include historic gardens, rural farms and plantations, urban and commercial areas, industrial facilities, battlefields, and many more.

Landscape and Environmental Archaeology have played a large part in the research taking place at Poplar Forest.  It has been one of the department’s main goals to study the and eventually reconstruct the ornamental landscape that played such a major part in Jefferson’s plans for the property.  A variety of different methods are being used to analyze the landscape and determine what the historic landscape may have looked like during the Jefferson Era; some methods include pollen analysis, soil chemistry, archival analysis, and dendrochronology (tree ring dating).

This week, the Poplar Forest archaeology department had the privilege of joining up with the Monticello archaeology field school to sit in on two lectures relating to environmental archaeology.  On June 20th, we traveled to Monticello and heard from Dan Druckenbrod on the application of dendrochronology to historical archaeology.  By taking a thin core of wood from a tree, one can examine the rings and come up with a fairly precise date for when the tree was planted.  Studying tree rings can also tell us a great deal about the environmental conditions for any given year during its life; for instance, if the rings are particularly close together one year, that could be indicative of a drought in the area.  Poplar Forest has used dendrochronology to date numerous trees in order to determine the age of various landscapes throughout the property.  On June 21st, the archaeology department traveled back to Monticello to learn about the field of palynology, or pollen analysis, from John Jones.  Pollen analysis is used in many fields, including the oil industry, forensics, beekeeping, and of course, historical archaeology.  By extracting and studying pollen granules from the soil, archaeologists can interpret the influence of vegetation and climate change on human behavior and demographic patterns, as well as the effect of humans on the environment.[1] Poplar Forest has used palynology to determine what species of plants, both ornamental and agricultural, were grown on the property over time. 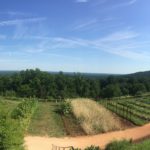 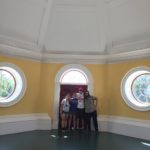 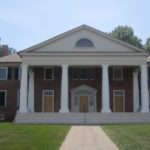 In addition to sitting in on the lectures at Monticello, the Poplar Forest archaeology department was able to tour some of the sites that their field school has been working on, in addition to tours of the main house and grounds.  The department took a similar trip to James Madison’s Montpelier the following day.   By visiting the sites of other field schools, the Poplar Forest field school students were able to compare and contrast the work being done at similar mid-Atlantic presidential sites.  The current site at Montpelier is a more complete, though somewhat earlier, version of what we hope to find on site 33; their archaeology department has discovered a complex of slave cabins from Madison’s era of occupation.   By touring the main houses of each property, students were able to compare and contrast the means through which each property was preserved and interpreted.  Monticello was primarily focused on Jefferson’s life, and what he did while spending time at his home; Montpelier was similarly interpreted as applied to Madison.

This week, field school students continued excavating their units in Site 33 along the Northwest Curtilage, in hopes of locating mid-19th century slave quarters.  Students have been working on the units toward the center of the site, close to where a large quantity of building materials, specifically nails, had been discovered through earlier excavations.  The majority of artifacts coming out of the units have been refined earthenware ceramics, vessel glass, and nails which are consistent with the approximate date range of our site.  One of the more interesting finds this week has been a piece of a knife tang.  A number of features, primarily plow scars, were also found in the current units.  This week, students have also been working in the lab, learning to wash, label, and catalogue the many artifacts that have been discovered on the site thus far. 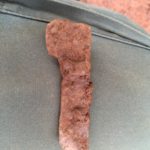 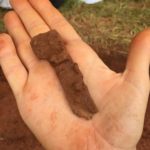