A Spoonful of History

Planning a holiday party soon?  Here at the Poplar Forest Archaeology Lab, we’ve discovered an interesting multi-tool in the Wing of Offices artifact collection that’s perfect for whipping up your favorite festive drink!

Although Poplar Forest is most notable as the beloved retreat of Thomas Jefferson and his family, many others have called it home since then. Poplar Forest changed owners multiple times after Jefferson’s death and was inhabited into the late 20th century (read more at poplarforest.org).  As a result, we frequently find interesting objects that belonged to the later occupants of Poplar Forest, such as this combination cocktail spoon and bottle opener.

Stamped into the handle of the spoon is: “The Shoreham Hotel and Motor Inn Washington. 8. D.C.” 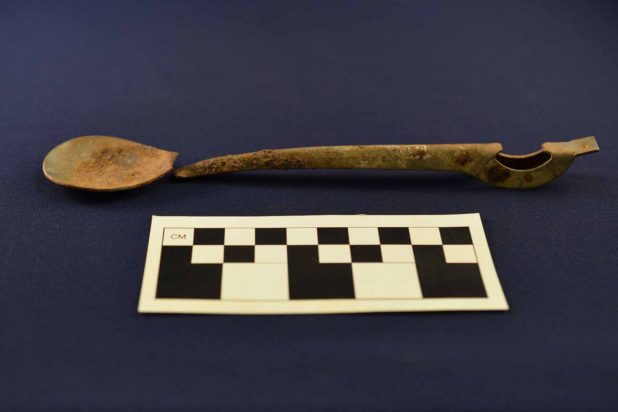 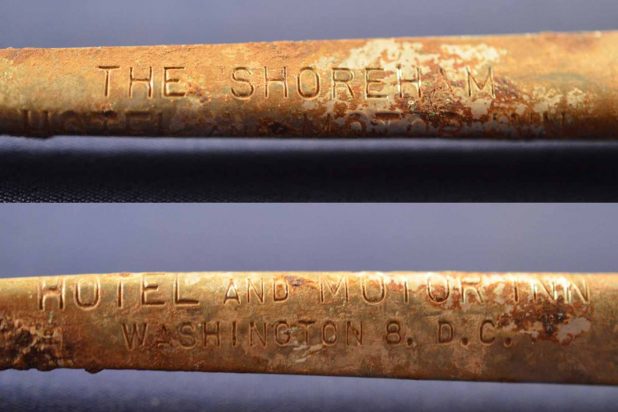 From these markings, the origin of this spoon has been traced to The Shoreham Hotel, built in 1930. The motor inn was a later addition in 1959, opening in the summer of that year (Pittsburgh Post-Gazette Aug 5, 1959: 10).  The hotel is still in operation today as the Omni Shoreham Hotel.  It is located in northwestern Washington D.C. at Calvert Street and Connecticut Avenue, near Rock Creek Park and The Smithsonian National Zoo (Omni Hotels and Resorts).  The hotel was built by Harry Bralove, the owner of a local construction company who was determined to create a grand hotel in the heart of the nation’s capital despite the onset of the Great Depression (Colbert: 2).  Bralove succeeded, and the Shoreham became an important landmark for entertainment and politics soon after its grand opening.  The Shoreham was chosen to host the first inaugural ball of President Franklin Delano Roosevelt in 1933, and has held an inaugural ball for every subsequent president through Bill Clinton (Colbert: 5).  The lavish hotel has hosted numerous other politicians, dignitaries, musicians, actors, and athletes throughout its history (Colbert: 3-10).

In 1979, the Shoreham was purchased by the Omni Hotels Corp., then Dunfey Hotels owned by Aer Lingus (Company-Histories.com).  The Omni Shoreham Hotel has been awarded AAA’s Four Diamond status since 2000 (Colbert: 15; Omni Hotels and Resorts) and is a member of the National Trust Historic Hotels of America (Colbert: 15; Historic Hotels of America).

For pictures of the Shoreham Hotel, check out these vintage postcards:

At first, the discovery of this multipurpose spoon during excavations on the Wing of Offices seemed to be the only connection between Poplar Forest and the Shoreham Hotel.  However, this elegant hotel has an indirect connection to Thomas Jefferson and his love of architecture.  The Shoreham’s Palladian Ballroom features a series of murals by James Reynolds that depict places connected to Jefferson and his interpretation of the Palladian style, including Monticello and the University of Virginia (Colbert: 12).

For pictures of the Omni Shoreham Hotel today, including the Palladian Ballroom, visit the official hotel website.

Based on the history of the Shoreham Hotel, we can roughly date the manufacture of this spoon between 1959 and 1980.  As such, the spoon was most likely acquired by a member of the Watts family, who owned Poplar Forest from 1946 to 1979 (“Change After Jefferson”).

Additional information about this unique spoon comes from the maker’s mark stamped into the spoon handle, which reads: “Remembrance B&B ST PAUL MINN USA.”  This is the mark of Brown and Bigelow, Inc., established in 1896 as a calendar company.  This company continues to make calendars, but has expanded its business into the production of promotional products for a variety of industries (Brown and Bigelow, Inc.).  Although it has been discontinued, our combination spoon and bottle opener was one of these promotional products.  Brown and Bigelow registered the “Remembrance” trademark for this and other cutlery/tool items in 1954, but might have used the name and logo prior to its official registration (JustiaTrademarks).

Did you know you can buy just about anything you see in a room from hotels including shower heads? Just don’t walk off with the towels!